Q and A with Robert Orlando

I am delighted that Robert Orlando will be coming to Butler University on November 13th at 7pm in Gallahue Hall Room 108. We’ll be showing his movie, A Polite Bribe

, and he’ll also speak about his book Apostle Paul: A Polite Bribe which is available for pre-order from Wipf and Stock as well as on Amazon.com

. After the movie, Orlando will be sitting down with me, and also Perry Kea of the University of Indianapolis, for a Q&A session. But to lay the groundwork, we thought it would be a good idea to do a Q&A here. I’ve asked some questions, and Orlando has responded to them, and both are presented in the post below. Feel free to ask further questions below in the comments section. And if you are in the area, please do join us on November 13th!

· James McGrath: A documentary on the apostle Paul stands out as rather different from your other filmmaking projects. What led you to decide this was something you wanted to pursue?
Robert Orlando: Since I was a teenager, I have had a deep passion for Paul which came as the result of a deep spiritual experience. Since then, I have studied him under several guises, as theology student, independent scholar, and story analyst. But from a point of passion, what really struck a chord for me was living through NYC during 9/11. While I knew Fundamentalist Christians were not flying planes into buildings, in the bible church world that I knew, there was a lack of self critical thought that could temper the “God told me” American extreme. I had known the human side of biblical history because I not only knew the lionized Paul of Acts, but the cranky, angry, and passionate Paul of his letters. At the time I also met Alan Segal who knew the same Paul, and after I spoke to his students at Barnard (Columbia), he agreed I needed to make a documentary.
As a documentary, I think it is similar to some of the my other films in that it takes on the form of a detective (noir) story exploring history. There are some shadows as to what is known from Acts, the underbelly of Apostolic tensions that have not been fully explored, and an actual crime scene at the Temple where Paul was almost assassinated. And because the story was expressing a part of Christian history that so few Christians knew, I did wanted to create something new. I did not want any affiliation with those bad Christian films of the past. In Apostle Paul: A Polite Bribe: each panel is an original work of art.
·   McGrath: Of the things that you uncovered in the process of researching the film, which surprised you the most? 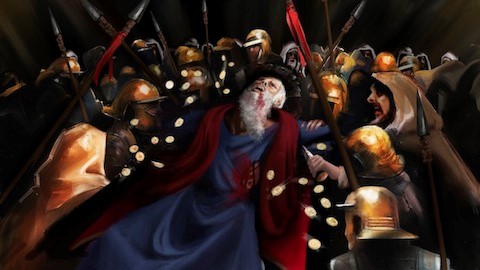 Orlando: The Collection period. I always knew of Paul’s eccentricities and how they impacted his life and ministry. I even knew a lot about the conflict with James and the other Apostles that caused him such pain, BUT, it was the discovery of the collection as an actual plot that not only tied together the other two themes mentioned, BUT actually bring to light a new narrative for Paul and possibly the New testament.  I was pleased when so many of the well known Pauling and New testament scholars followed my arguments and story and found my conclusions refreshing and intellectually acceptable. I did not have full agreement on all details but definitely no plausibility. You can read more reviews here . One scholar, Philip Esler, a Catholic, hosted a screening at Univ of Gloucestershire in UK, and said on stage, that he was amazed at how much of the story reflected his own thoughts and ideas, but were never inside the Academy. Same with numerous others.
·   McGrath: Two things about “A Polite Bribe” really made it stand out to me among documentaries I’ve seen related to the Bible: the sheer amount of time that is dedicated to hearing from scholars, and the very artistic use of a very distinctive sort of animation. How did those come about? Were those always part of your vision for the film?
Orlando: On the scholars, my response would be that they were all part of my journey, like guides who I could call on to discover greater truth. Reading their books was one thing, but engaging in a two-way conversation – Socratic style – with 30 scholars was incredible. Some of them were encyclopedic, some innovative, some very honest, and all smart! And because my story was based on a narrative and not a political or theological agenda, the questions lent themselves to far more consensus. I was not asking: do you believe in the Trinity and where do you find it in scripture? What I was doing was reconstructing a new narrative based on the critical scholarship that has been amassed over the last few hundred years. Because the scholars were telling a story, they would not just expositional, but insightful and added to the story. While I never formally received my PhD, I think my eight or so years on this film, and my 50 hours of interviews should be a higher degree! 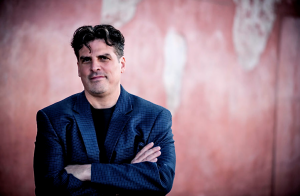 On the film, one answer is that Hollywood would not give me the money to make the Sequel to the Passion, which would have been amazing. I still have the screenplay and am waiting for the right opportunity. But once I knew I would not have the investment needed to drive an epic film and cast of stars, I quickly determined, I would also not  put together another hokey “dust and sandals” film, the kind you find in church gift shops, next to the Jesus loves me ceramic figurines. These films sicken me and even at my most passionate moments of faith, I thought them an embarrassment to the grand tradition of Christian art.  I mean how did we get from the Sistine Chapel to ceramic dolls? I understand the simple sentiment, but I think we’ve had enough. We need Christian work to feed an challenge a thinking adult audience.  Even worse than the Fundamentalist lack of critical thinking, is how lacking the modern Christian is – no imagery.  From this vacuum I began to develop a style, which was combination of pseudo Caravaggio and my own creative team’s modern digital style. I wanted it to feel a bit retro, but new because the scholarship was cutting edge!
·    McGrath: What do you hope those who see your film will take away from it? What is the significance of Paul, and of your own distinctive understanding of Paul, for our time?
Orlando: That Paul and early Christianity were not forged with a sudden light from the sky (something Paul never claims) but with a series of cultural and theological innovations, most times looking back on historical events in an attempt to make sense of them. Paul, after his encounter with the Christ, did this my examining the Hebrew Scriptures, but he also used his own innovation to think of a new meaning of Resurrection, beyond the General Resurrection of Judaism. So did the Gospel writers to understand the meaning of Jesus’ life after he did not return as originally predicted, and the Jewish war wiped out Jesus’ followers in the Holy Land. So, if we know this body of information, the question becomes, as modern thinkers, who do not have to adhere to an ad hoc institutional authority, how do we then think? Well, for openers the shift might begin with a more active pursuit of the basic facts of the bible. I am amazed how many people know nothing about the New Testament, aside from some potential interpretations of scripture! I mean basic facts about number of books, authors, timelines, etc. Part of the reason that many are so shocked by my film (and book) is because they are hearing the basic facts for the first time. There is a malaise of conventional thought that allows for profound unchallenged assumptions about what is true and not true.

·    McGrath: Thanks so much for doing this Q&A on the blog! I hope that it may continue in the comments section, and I look forward to seeing you on campus on November 13th!