Which Came First? Thoughts about Jesus and the Binding of Isaac

Which Came First? Thoughts about Jesus and the Binding of Isaac September 13, 2014 James F. McGrath

I’ve been reading a wonderful book about the Isaac story, James Goodman’s But Where Is the Lamb?: Imagining the Story of Abraham and Isaac

The story of the binding of Isaac is echoed in the New Testament, when authors say that “God did not spare his only Son.” But it is interesting to note that quite a number of ancient interpreters of the story were of the view that Abraham actually did kill Isaac, but God raised him from the dead. Others merely said that Abraham believed that God could do that.

And so I’ve found myself wondering what led Christians to apply the imagery of the Akedah to Jesus, and in what order they did so. Did they start by having dreams and other experiences that they interpreted as seeing him alive, and then extrapolate from that to a sacrificial significance of his death, on analogy with Isaac? Or did they start by making sense of Jesus’ death in light of the binding of Isaac, and extrapolate from that to the belief that he must have been spared from death through resurrection?

I’ve been reading Goodman’s book, and thinking more about these stories, in preparation for leading a seminar session with local artists. And so I’ve also been looking for art that brings the Isaac and Jesus stories into proximity with one another. This is the only one I’ve found so far, from Jean Miélot’s French translation of Speculum humanæ salvationis: 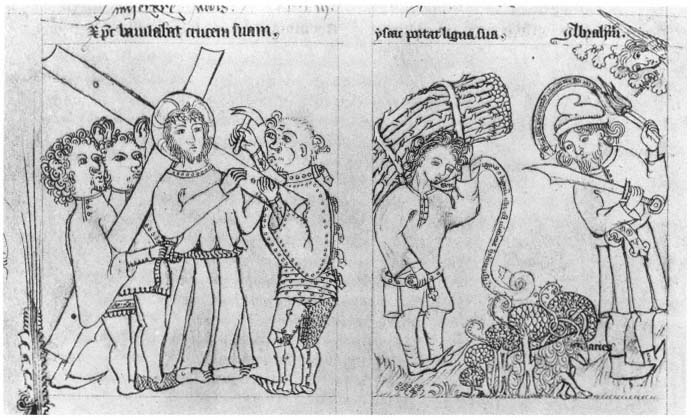 If you know of others, please share them with me.

In discussing this topic with my co-presenter, I also learned about the existence of a Binding of Isaac video game.

Finally, let me share this clip in which president Barack Obama mentions the Isaac story, for those who may not have seen it: