Because of the Angels

Fred Clark posted about the obscure first half of 1 Corinthians 11, and offered a Whovian suggestion about what “because of the angels” might mean. And so I decided it was worth turning into a picture: 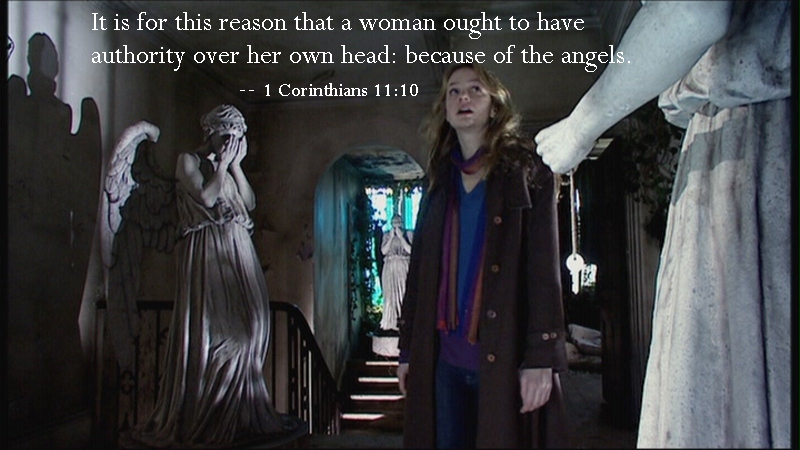 That passage continues to puzzle me, and my suspicion is that in the first half, Paul is at times quoting the Corinthians, much as he does elsewhere in the letter, perhaps also quoting them quoting his own words, as well as quoting what they said. And as in other such passages, Paul offers some initial agreement, only to then challenge their application of his words or other shared principles.

By the end of the passage, Paul says that women should have authority over their heads. This was so unacceptable to some translators that they essentially inverted the meaning, rendering it as “a sign of her submission to authority on her head.” But that isn’t the meaning of the Greek idiom.

In some parts of the world, the issue of women covering their heads is still a live one, believe it or not. What are your thoughts on this passage? Have you managed to make sense of it, in a way that reflects what the Greek text actually says?

October 11, 2014 Dangerous Debates?
Recent Comments
38 Comments | Leave a Comment
Browse Our Archives
get the latest from
Religion Prof: The Blog of James F. McGrath
Sign up for our newsletter
POPULAR AT PATHEOS Progressive Christian
1

A Straight Christian Mom's Response to...
FreedHearts
Books by This Author Books by James F. McGrath