Too Much Freedom, Still Not Enough

Plato’s Republic discusses how democracies devolve into tyrannies. When freedom is made an end in itself, the desire for unlimited freedom eventually sets a course towards anarchy, with people living in fear as nothing and no one is restrained, until eventually someone offers to bring things under control and restore order and security.

When a democracy which is thirsting for freedom has evil cupbearers presiding over the feast, and has drunk too deeply of the strong wine of freedom, then, unless her rulers are very amenable and give a plentiful draught, she calls them to account and punishes them, and says that they are cursed oligarchs…The excess of liberty, whether in States or individuals, seems only to pass into excess of slavery.

At times, the United States seems to be following that very course.

For instance, take a look at what sorts of things some people freely say in the United States, on Facebook, bizarrely claiming to act themselves in the name of freedom and even patriotism: 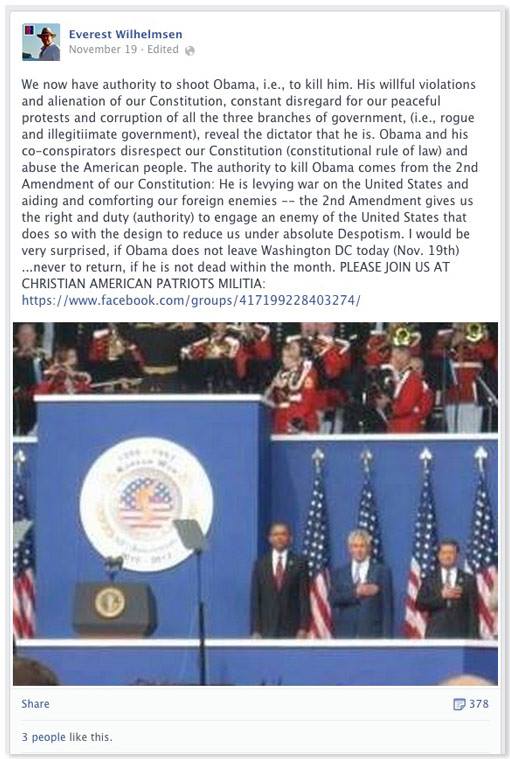 A retired Navy officer recently wrote about the sort of menace that people like Everest Wilhelmsen pose – precisely because they claim to be acting on behalf of freedom, even though they manage to call for the murder of the president and don’t even suffer the consequence of having their Facebook page shut down right away.

Most people in America have no idea what despotism means, what it means to have their freedoms genuinely restricted. And so they regard a lack of favoritism towards them and their viewpoint as though it were persecution. And they set us on a course, ironically, which is bound to involve a pendulum swing in the other direction, away from freedom.

In this very context in which people claim that the president is a despot and freely call for his murder, others share nonsensical claims that their freedom is being restricted, such as this one which I came across recently on Facebook: 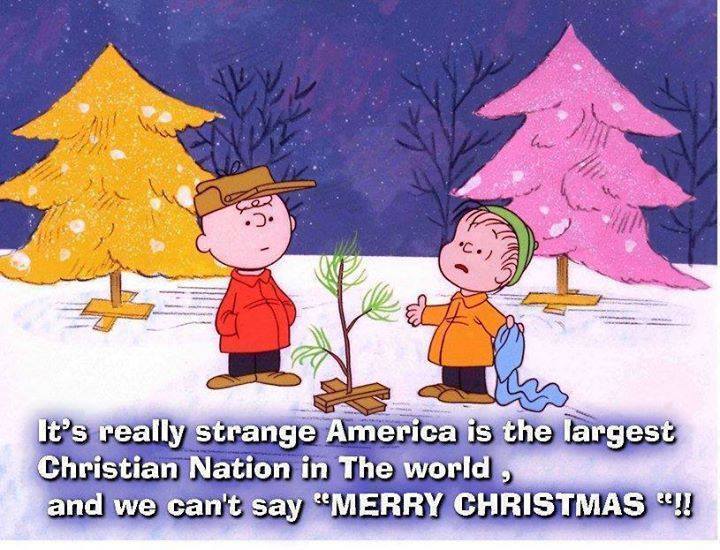 You can say “Merry Christmas”- did the person who created this not realize that they were doing so when they posted it? How can anyone think that this statement reflects reality? It is incredibly easy to prove it wrong. Just try wishing someone a Merry Christmas.

I’m still here. I’ve broken no law, and no one will be along to arrest me.

So how can this sort of thing be circulating in the United States? Presumably they are upset that some stores are greeting people during the holiday season in a way that reflects an awareness that we are a pluralistic society, and that not everyone celebrates Christmas. Concern for others besides Christians is what some American Christians consider persecution!

We have become accustomed to having so much freedom, that some of us consider it tyranny when they cannot do absolutely anything they want, and have others do exactly what they want.

If one person has unlimited freedom, that is tyranny. They can rule as they please.

Democracy in which the rights of minorities are safeguarded is something different. It maximizes freedom for all, by placing minimal, necessary, and sensible restrictions on everyone’s freedom inasmuch as that is what is needed in order to maximize freedom for all. Your freedom to impose your religious view on others through the means of public schools is restricted, for instance – in the interest of protecting others from having your views imposed on them through the means of public schools.

I hope that increasing numbers of people in my country will grasp that. Because if we cannot set a clear course towards that historic stance of democracy as the United States has sought to define and practice it, then we are headed towards something much, much worse.