What an amazing episode of Doctor Who “Dark Water” is. It starts with Clara speaking intensely with Danny on the phone, including saying that she loves him, and emphasizing that this isn’t just the casual phrase but something deeper.

And then he stops responding, and we soon learn that Danny had been hit by a car while Clara was talking to him on the phone, and has been killed.

Clara calls the Doctor, and we get the sense that it takes a long time for him to answer his phone. When he arrives, we see Clara ask the Doctor to take her to see a volcano. She takes all seven of the Doctor’s keys to the TARDIS from his pocket as well as various hiding places. She had previously learned that lava can destroy TARDIS keys. She also takes what she believes is a sleeping patch, to put the Doctor to sleep. When they are at the volcano, Clara starts throwing the keys into the lava, telling the Doctor that he must help her save Danny, and that she won’t accept no for an answer, and won’t let talk of paradoxes stop her. She throws every last key into the lava, and is astonished at herself, but says she would do the same again. 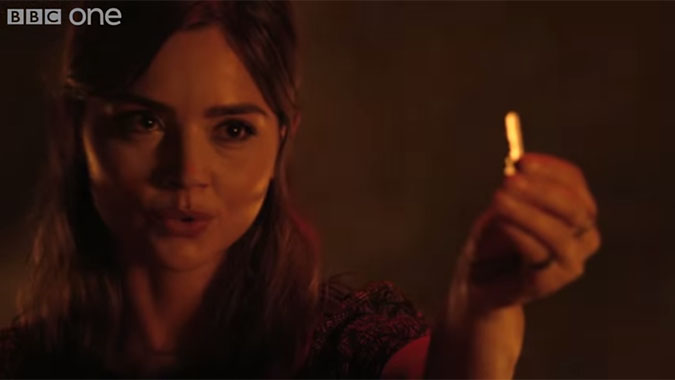 However, it turns out that the thing Clara tried to use on the Doctor was not a sleep patch – it induces a dream state. And so the Doctor now knows what Clara was planning to do.

When Clara says “I love him,” the Doctor responds by saying, “Yeah, you’re quite the mess of chemicals, aren’t you?” This is a striking side of the Doctor to see, in a season that will end with him confronting the Cybermen. When did the Doctor become so callous about emotions, and can he keep it up?

Having seen Clara betray him, the Doctor tells her to “go to hell.” She says “fair enough.” But then the Doctor explains that he meant it literally. They will go find Danny and bring him back.

The Doctor mentions that every culture has a concept of an afterlife, and that he always meant to look around for it.

Clara is astonished that the Doctor still wants to help her even though she let him down and betray him. The Doctor asks her, “Do you think I care for you so little that betraying me would make any difference?” This is arguably one of the most powerful lines in the history of the show. And it relates directly to the theme of emotion in this episode. Later, we’ll see Danny Pink in the nethersphere, contemplating pushing a “delete” button that will get rid of those annoying emotions that seem too powerful to cope with.

The Doctor’s care is one that is deeper than chemicals. Indeed, as this season has often shown, the Doctor makes a point of not letting the chemicals, the natural emotional response to danger and death, interfere with his efforts to save lives. He cares too much to allow rampant emotions the possibility of costing more lives.

The Doctor gets Clara to make a telepathic link with the TARDIS once again, and with the safeties off, ask where Danny Pink is now.

The place they arrive is quite remarkable – a building with human remains sitting on chairs in tanks of liquid. It includes a monument that says “Rest In Peace: We Promise.” The Doctor tries to teach Clara his approach, saying at one point, “We’re here to get your boyfriend back from the dead – so buck up and give me some attitude.” Fans of the classic show might recall the Doctor’s dealings with Ace as his companion – especially if they know that the plan for the next season, had a hiatus not interfered, included plans to have Ace train to become a Time Lady herself. In this season, Clara as the Doctor’s apprentice has been a major theme.

Meanwhile, we have also been seeing Danny in the Nethersphere, where Seb checks him in, indicating that there are forms to be filled in. Seb asks if Danny is being cremated, since that is the default these days, adding ominously, “If they only knew.” We also get the phrase, “Welcome to the underworld.”

Back at the company known as 3W. We learn that its founder discovered that the white noise on televisions was the voice of the recently deceased. Having found out the truth about the afterlife, he created the company that offers aftercare. 3W stands for the three words the company founder heard from the dead: “Don’t cremate me.” It turns out that the dead still experience what their bodies experience – and so the pain of cremation, for instance, or of having donated their body to science. The Doctor thinks this is idiotic, and insists that the dead are dead.

They meet Missy there. She introduces herself as an android: Mobile Intelligent Systems Interface – MISI. And she kisses the Doctor. She also gets the Doctor to ask “Doctor Who?” in a way that becomes even funnier when we find out who she really is.

Back in the Nethersphere, Danny quips about there being wi-fi in the afterlife, and iPads, to which Seb replies, “We have Steve Jobs.” He goes on to say, “This isn’t really an afterlife – just more life than you were expecting.” He uses the analogy of what it would be like if babies in the womb could communicate with one another. They would think that life lasts for roughly nine months, and then you leave, never to return again.

In the nethersphere, Danny meets the boy he killed, when he was a soldier and fired into a building without looking, having been ordered to secure it.

The X-ray water that only shows organic material – “dark water” – is a stroke of genius, even if it doesn’t make much logical sense. It allows for the current state of the bodies to be revealed only later – they have been turned into Cybermen!

Towards the end of the episode (which is the first of two parts of the story) the Doctor learns that the nethersphere is in fact a Gallifreyan Hard Drive, with the people whose minds are in it thinking that they are in heaven.

And we learn that Missy is short for Mistress – and when it doesn’t click for the Doctor, she says that she couldn’t very well still call herself the Master. That reveal was brilliantly set up – the previous references to a time lord he left behind, and to her being called “Mistress,” will have had fans of the classic show wondering whether she could possibly be Romana – although having Romana turn to evil would have been unlikely to be persuasive. Having only had a little while to think about it, my impression is that Michelle Gomez plays the character of the Master/Mistress fantastically well, and so I hope hers will be a recurring role. And I’d love to see the Mistress end up encountering River Song!

The episode takes us only to a fake afterlife. But the very fact that the show goes even there is interesting. Torchwood adopted the stance that the dead may not be unrecoverable, but unless they are brought back, they are in darkness. Here it seems that someone with the desire can actually catch “souls” before they go wherever they go naturally, and put them someplace better – or perhaps worse. And so this episode brings a lot of interesting questions into focus. What happens naturally when one dies? Can scientific methods be used to make something else happen? And if the answer to the latter question is yes, then isn’t it likely that some beings will do that? And if they do, how will someone know who ends up there – unless the Doctor intervenes?

Did you enjoy “Dark Water”?

November 2, 2014 Corinthian Confession
Recent Comments
7 Comments | Leave a Comment
"The revelation has been done before--see Planet of the Apes--but it works because it's true. ..."
Melanie N. Lee Doctor Who: Orphan 55
"Thanks for finding all the little nuances, some I recognized and some I didn't."
gospelaccordingtodoctorwho Doctor Who: Orphan 55
"Like most ancient authors, that wasn't an exclusive concern. I think that Matthew knew, for ..."
James F. McGrath Mythicism, Isnads, and Pseudepigrapha
"I confess I didn't see the reveal coming but as soon as it arrived I ..."
TrevorN Doctor Who: Orphan 55
Browse Our Archives
Follow Us!

Sin and the Rules of the Market
A couple of weeks ago, a Calvinist bro on Twitter was talking...
view all Progressive Christian blogs
What Are Your Thoughts?leave a comment
Copyright 2008-2017, Patheos. All rights reserved.