Geology is the Least of the Flood’s Problems

Someone commented on a post I shared on Facebook, “The Bible gives clear evidence of the dates [of the flood] in Genesis 5 and 11.”

Murray Hogg offered the following reply, which I thought was worth sharing as a post on my blog, and so I am doing so with his permission:

It sets the date of Noah’s flood to about 2300 BC <http://creation.com/the-date-of-noahs-flood>.

Problem is, this is a period of history about which we know a fair deal, and there is zero reason to think that there was, at this time, a global flood which destroyed humanity.

I mean, seriously, we’re talking about an event smack bang in the middle of the period during which Old Kingdom Egypt existed and for which we have a continuous list of the Egyptian rulers (just to cite one example).

That’s “continuous” as in “unbroken by a major civilization ending catastrophe.”

I don’t mean to marginalize the contribution of geologists, etc. to this debate, but seriously: one doesn’t even have to look at geology to know that there was NOT a global flood in 2300BC or thereabouts leaving only about half a dozen people alive.

We’re not talking “pre-history” here –there are solid historical records which show cultural continuity throughout the world right when the Bible claims every human culture was destroyed.

Still, I suppose it’s much easier to construct a satisfying theory if you ascribe to a doctrine of willful ignorance.

November 20, 2014 Blogger Session at #SBLAAR14
Recent Comments
27 Comments | Leave a Comment
"In Acts 15:28, the passage in the comment that you were responding to? The point ..."
James F. McGrath Come Compromise at Crooked Creek Baptist ..."
"is the argument that canonical authority is rooted in Scripture qua Scripture, or that the ..."
gadfly Come Compromise at Crooked Creek Baptist ..."
"...because, if you confess with your mouth that Jesus is Lord and believe in your ..."
gadfly Conservative Christianity Isn’t Christianity
"Thank you for trying! I'll read these once I turn my attention back to this ..."
James F. McGrath Cercetări în Istoria Propagandei Comuniste despre ..."
Browse Our Archives
Follow Us! 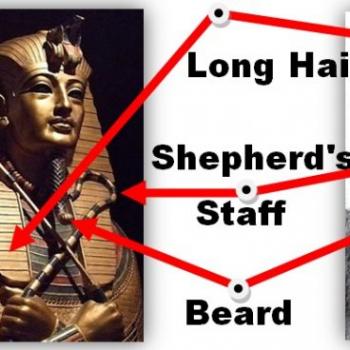