When God Became the Devil

I thought I should share what Richard Beck wrote about the penal substitution theory of the atonement, which is very popular today, particularly among conservative Evangelicals:

Prior to Anselm, the main atonement theory used by the church was Christus Victor. Specifically, humanity was being held captive by the Devil and Christ died to free us from this slavery. The Harrowing of Hell icons in the Orthodox church, which are their Easter icons, depict this. In the Harrowing of Hell icons you see the gates of hell broken down and Satan being bound while Christ reaches out to a captive humanity with Adam and Eve first in line.The thing to be noted here is that the evil, violent and diabolical aspect of salvation history was external to God. The problem was the Devil. Humanity was being rescued from an evil that was external to God’s character and nature. But with Anselm a change happened, a theological twist still alive today. Worried as he was about the role of the Devil in Christus Victor schemes Anselm shifted the problem away from the Devil and toward the character of God. The drama of salvation was no longer an external conflict between God and the Devil but an internal conflict within God’s own heart, a conflict between God’s wrath and God’s love.In short, the problem to be overcome in the atonement was no longer external to God’s character. The problem–the evil, violent and diabolical forces arrayed against us–had been internalized, absorbed into God’s character. The Devil was no longer the problem to be overcome in the drama of salvation. Having absorbed and internalized the diabolical aspects of the drama the problem became God’s newly conflicted character.We are no longer saved from the Devil. We are saved from God.With penal substitutionary atonement God had become the Devil.

Beck’s post was inspired by Adam Kotsko’s book, The Politics of Redemption: The Social Logic of Salvation

November 26, 2014 Arrogance and Ignorance are an Unpleasant Combination
Recent Comments
7 Comments | Leave a Comment
"Excellent article. Should be posted on all Church Doors."
Walter Quiring Warning Labels for Christianity?
"Brilliant perspective. It is not surprising that the fundamentalist political right-wing imports fundamentalist religious zeal ..."
robrecht Qx2: Comparing Anonymous Sources and their ..."
"Time to apply Occam's razor!"
Zeigler John Prove It
"As a foreigner looking at American politics, I'm bemused at how similar both sides are ..."
Harold Porter Prove It
Browse Our Archives
get the latest from
Religion Prof: The Blog of James F. McGrath
Sign up for our newsletter
POPULAR AT PATHEOS Progressive Christian
1 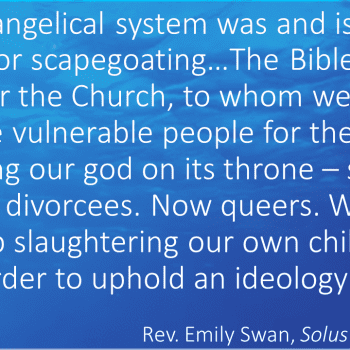