One text which received a significant amount of discussion in the Bart Ehrman book review panel session at SBL was Mark 10:18, in which Jesus is depicted as saying, “Why do you call me good? No one is good but God alone?”

There is a long tradition of avoiding the most natural sense of these words: that Jesus was denying that he is God, and denying his own goodness.

While that meaning is at odds with later orthodoxy in which Jesus is both God and not merely good but sinless, it is the only understanding of the text which is compatible with Jesus having been a historical human being who was more specifically a pious and devout Jew.

In Judaism, the pious consistently express humility before God, and emphasize their own inability and inadequacy and unrighteousness when compared with the one God. This is true even of those who are astonishingly upright and capable. To be good and able, and proud of one’s accomplishments, would simply show oneself to have fallen into the sin of pride.

And so here we see a Jesus who does not think he is God, but who is not necessarily lacking in goodness. Indeed, it was an expression of human goodness to not be proud of one’s own goodness, and to recognize that no human goodness compares with the perfection of God. 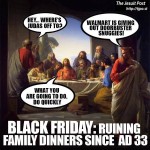