The Patrologist recently blogged about exegesis as reading, warning about two extremes – the tendency to falsely claim to be merely reading and not interpreting, and the tendency to atomize and miss the big picture. Here’s the conclusion:

I am constantly amazed to interact with so called ‘critical scholars’ who look at, say, a book like John’s Gospel and see nothing but a pastiche of cut-up pieces that represent a proto-Gnostic text re-edited by a proto-Orthodox edited then re-edited again. Why do they see only that? It’s because they analyse a painting by looking at each blob of paint from a stroke of the brush and consider it a different source. They never step back and see the artistry. Whether they are right or wrong is irrelevant to the fact that they can’t step back and look at the whole, can’t discuss the meaning of the book, can’t discuss themes, genre, art, motifs. Because they can’t decide which of 400 types of genitives the proto-Gnostic redactor meant, and their competency in the language is like a tourist who got off the plane with an antique reference grammar of the language and nothing else.

Of related interest, Fred Clark (continuing his series on Nicolae: The Rise of Antichrist) writes about Tim LaHaye’s approach to the New Testament:

LaHaye insists he reads the Bible “literally,” but his literal interpretation always takes a lot of work because it’s a literal reading of the text in support of an idea that literally can’t be found within its pages — the idea that it’s mainly about a series of events that won’t take place until 2,000+ years later.

Consider, for example, Tim LaHaye’s idea that the future Antichrist will desecrate and then destroy the Temple in Jerusalem. That’s a problem because there hasn’t been a Temple in Jerusalem for more than 1,900 years. So in order to “literally” interpret every biblical reference to the destruction of the Temple as a prediction of the distant future, LaHaye has to add something the Bible itself doesn’t say. He has to look between the lines to find, or to invent, an implicit, hidden prophecy that the Temple in Jerusalem will one day in the future be rebuilt in order that a coming Antichrist will, one day in the future, have the opportunity to desecrate and destroy it all over again.

Outside the confines of Tim LaHaye’s “Bible prophecy” mystery cult, there’s a fascinating argument about those biblical passages. Some argue that they were “prophetic” in the modern, predictive sense of the word — meaning that they were written before the destruction of the first and second temples by inspired writers who foresaw and foretold the events that thereafter came to pass. Others, a bit more convincingly, argue that these passages were written after those events in an effort to discern the theological meaning of those calamities.

That’s why 70 CE is such an important date in biblical studies. That was the year in which Roman soldiers under Emperor Titus destroyed Jerusalem and the Temple — an overwhelming, world-changing event for first-century Jews and Christians. The earliest New Testament texts, the epistles of Paul, were written before that event and don’t mention it at all. But later texts, such as the Gospel of Matthew, include many references to the Temple’s destruction. That leads most scholars to argue that Matthew was written some time after 70 CE, while some others argue that it was written earlier and that its references to the events of 70 CE were “prophetic” predictions of the horrors that were about to occur.

If you’re into that kind of thing, that dispute really is fascinating, but my main point here is that both sides of that argument disagree with the odd belief taught here in the Left Behind books, which is that the actual destruction of the actual Temple in Jerusalem that actually happened in 70 CEhas nothing to do with the Gospel texts that allude to the Temple’s destruction. Those texts, Tim LaHaye says, aren’t about the Temple that Jesus walked in and that Titus’ troops destroyed. Those texts are, instead, about a future Temple, one that hadn’t even been built yet and that, today, in 2014, still has not yet been built. For LaHaye, when Jesus spoke of the Temple, he didn’t mean the actual Temple there in Jerusalem in whose actual shadow he was actually standing. He meant some future Temple that would be built on the same site 2,000 or so years in the future.

That’s a pretty wild assertion, and it only gets wilder when LaHaye attempts to justify it as a “literal” reading of the text.

Click through to read the rest, which is full of Fred’s usual wit. 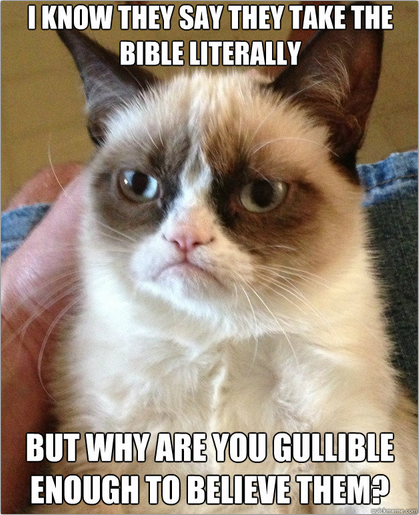 December 10, 2014 Asel by Vladimir Vlasov
Recent Comments
12 Comments | Leave a Comment
""The Secret Jewish Roots of Star Wars (or some other top franchise)""or some other top ..."
crackerMF #CFP Jewish Science Fiction and Fantasy ..."
"I'm merely questioning your assertion of "very powerful evidence of basic uniformity" and asking you ..."
robrecht The Aims and Ending of Luke-Acts
"I don't follow this. I was responding to thisIt's hard to say how uniform the ..."
Mark The Aims and Ending of Luke-Acts
"We can infer anything and then the inference become real . In science it becomes ..."
davidt Duel of the Antichrists
Browse Our Archives
get the latest from
Religion Prof: The Blog of James F. McGrath
Sign up for our newsletter
POPULAR AT PATHEOS Progressive Christian
1