Stuff Fundies Like shared this bit of Christian polemic against Satan…I mean, Santa: 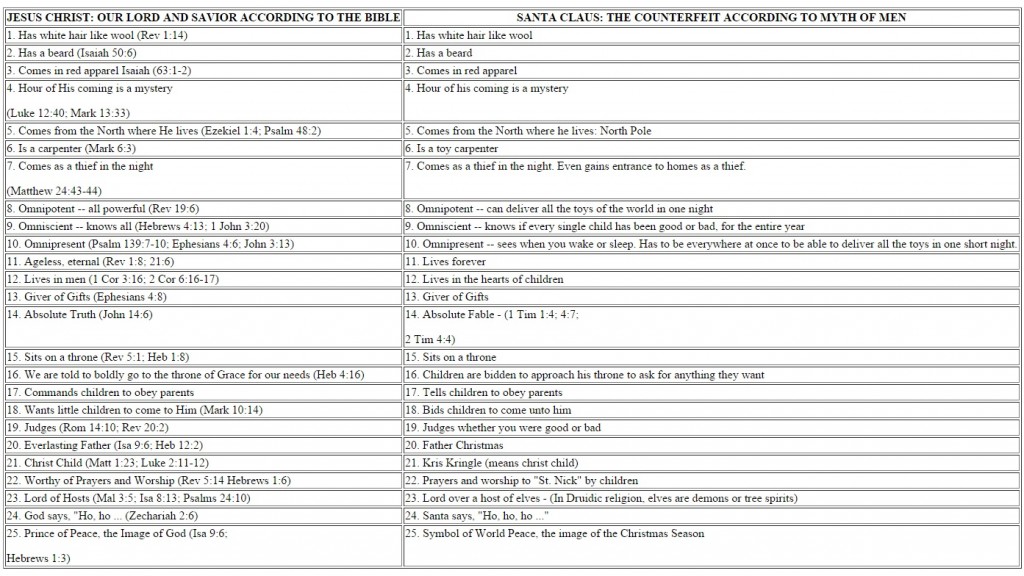 (If you cannot read the text in the image above, click through to read the chart on the Cutting Edge website).

This is exactly the same way that fundamentalists identify ‘predictions’ in the Jewish Scriptures that supposedly match up with Jesus. And mythicists, being mostly former fundamentalists, accept the claims of similarities that cannot be coincidence, and merely explain them in terms of borrowing.

But a look at the list above ought to lead to a different conclusion, namely that many of the supposed parallels are strained, and in the imagination of the fundamentalist conspiracy theorist, while even those that are not do not tell us anything serious about either Jesus, or Santa, or whether the latter is a satanic imitation – or any other sort of imitation – of the former.

Some get excited at slim connections – “Look, north connects Jesus and Santa – and also, the grassy knoll on the north side of Elm Street in the JFK assassination!” Critical scholarship, on the other hand, has to ask deep, probing questions which allow both for the possibility of borrowing, and the possibility that superficial similarities on a chart designed explicitly to offer such similarities, may obscure more substantive differences.

See also the article by Lawrence Mykytiuk in the Biblical Archaeological Society’s Bible History Daily on mythicism and the evidence for Jesus.

December 8, 2014
Pretend to be Paul the Time Traveler Day
Next Post

December 8, 2014 Doctor Who Christmas Cards
Recent Comments
46 Comments | Leave a Comment
"I'm always amused by apologists who think that the Corinthians would have traveled hundreds of ..."
VinnyJH Christians and Internet Rumors
"I love this article. Social media has shown me some very disappointing sides of certain ..."
Phil Ledgerwood Christians and Internet Rumors
"I was taught that "Amen" means something different than 'you may be seated. There are ..."
Deborah Harding The “Original Aramaic Lord’s Prayer” is ..."
"These are great points. What I appreciate about the article is that we tend to ..."
James F. McGrath We All Believe
Browse Our Archives
Follow Us!