The title of this blog post is the equivalent of what the Christian Broadcasting Network recently offered, when it reported on a radical cleric in Pakistan who managed to get a grand total of 40 people to attend a funeral honoring the terrorists who killed people at the Charlie Hebdo offices in Paris.

The headline they chose?

I am pretty sure that Westboro Baptist Church alone could provide us with 40 people who rejoiced at an attack on a magazine which has insulted Christianity far more often than Islam. But I am sure that there are more than 40 people in this country who think that Charlie Hebdo got what it deserved. And far more than 40 Muslims have decried the terrorist attacks in Paris.

And so is my headline to this blog post fair and accurate? If not, then neither is CBN’s.

Since CBN is Pat Robertson’s organization, this cartoon from Mike Luckovich seems the best way to sum up the point: 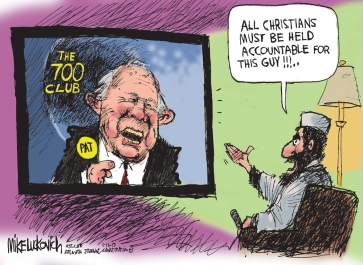