Doctor Who: Pyramids of Mars

is one of the great classic examples of the ancient aliens trope on Doctor Who. The episode focuses on a British explorer who, in exploring an Egyptian tomb, is taken over by the Egyptian god Sutekh, better known as Seth. The self-described servant of Sutekh, Ibrahim Namin, speaks of gods, unbelievers, and a temple. The Doctor, however, talks about a war among the Osirans, aliens who entered human mythology. They imprisoned Sutekh rather than killing him because it was against their code – to have killed him would have made them no better than him. This could be a starting point for discussions both of real-life criminal justice and of theological ideas of post-mortem punishment. Is extended incarceration really more merciful than destruction?

There is also an interesting time-travel trope as the Doctor shows Sarah what 1980 will look like if they leave now without stopping Sutekh. The Doctor identifies Sutekh with Satan, and also says that 740 gods combined forces to defeat Sutekh, whom he describes as “all-powerful.” And so when the Doctor manages to trap and kill Sutekh, that would seem to implicitly make him greater than the Osirans – an even more powerful god. And so this episode is a good starting point for discussion of natural gods and the Doctor’s quasi-divinity as well.

The episode also has connections with earlier episodes, as the Doctor notices that Sarah has put on something that Victoria used to wear when she traveled with him. He also mentions being middle-aged at 750 years old. And he says that he walks in eternity.

. You can also buy Sutekh

and other action figures separately. 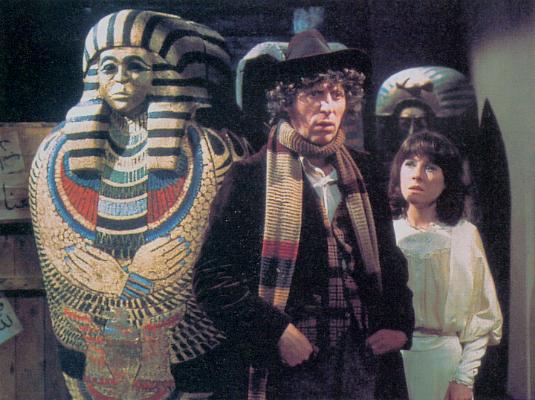