Doctor Who: The Brain of Morbius 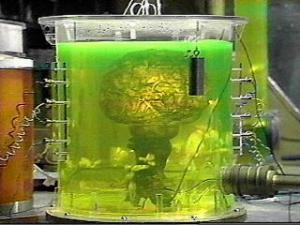 The “brain in a vat” scenario is a famous philosophical thought experiment, as well as a recurrent feature in science fiction. Given its title, it may be no surprise that The Brain of Morbius

features that scenario. Morbius describes his situation, having been given voice and hearing but otherwise no sensory inputs, and thus he describes himself as in torment, hell, agony, and as envying a vegetable.

Fans who know only the recent series will want to know that this is the episode from the classic series which featured the Sisterhood of Karn, which made a reappearance in the mini-episode “Night of the Doctor.”

There is a lot in the episode that is of religious interest. The Sisterhood are the caretakers of what they describe as a sacred flame, which produces the elixir of life. When the elixir is drunk, it is in a ceremony reminiscent of Christian communion. From a scientific perspective, the elixir is created by gasses which come from underground. When Solon enters their shrine, the sisters call it “blasphemy.” And so this is another instance of something scientific being viewed in religious terms which the Doctor does not sympathize with.  He says “there’s nothing mystical about that flame,” and that if it is dying, there must be a scientific explanation.

The Doctor’s view of immortality as a trap, and death as the price of progress, is noteworthy.

Also worth mentioning is the discussion of the Sisterhood, when one of them says that they should not let the Doctor fight their battle for them. When another of the Sister hood points out that there is too little that they can do, the reply is, “Then we should do the little we can.”

One of the  most intriguing elements was during a “mindbending” fight between the Doctor and Morbius, when we see faces of past personas, and they continue past William Hartnell. But were those intended to represent earlier regenerations of the Doctor, or past faces of Morbius? This was never addressed, and the canonical counting in the restarted series seems to exclude the possibility that the Doctor had prior faces to the one we consider the First. But it would still be interesting to know whether the creators of the episode intended at this point to suggest that the Doctor’s history was much longer and more varied than what we had been led to believe up until this point.

You can watch “Night of the Doctor” on YouTube:

January 19, 2015 Genesis 3 Paradox
Recent Comments
5 Comments | Leave a Comment
"I understand that you missed my point, but you seem even now to be fixated ..."
James F. McGrath The Aims and Ending of Luke-Acts
"But my point is that you seem to include those you listed including Matthew, Papias, ..."
Realist1234 The Aims and Ending of Luke-Acts
"nice hymns."
Brandon Roberts More Bible and Music
"Robert Mueller's report specifically states that Russia interfered in the 2016 election and that Mueller's ..."
Ocelot Aardvark Duel of the Antichrists
Browse Our Archives
get the latest from
Religion Prof: The Blog of James F. McGrath
Sign up for our newsletter
POPULAR AT PATHEOS Progressive Christian
1