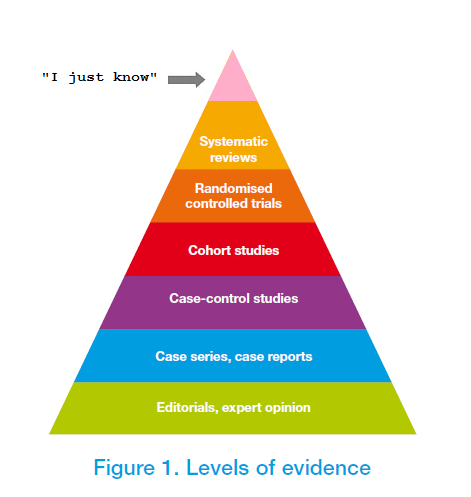 The Society for Healthcare Epidemiology of America (SHEA) announced today that “I just know” will replace systematic reviews as the top level of evidence available in medical research. For years scientists and doctors have dismissed anecdotes from the likes of anti-vaxxers and pseudoscience pushers, but it appears they are finally ready to listen.

“After much research and deliberation, we feel we cannot ignore what a parent or conspiracy theorist feels “in their gut”. There are just too many anecdotes and too many people buying untested alternative health products to ignore this any longer,” explained SHEA spokesman Dr. Harold Rami.

Homeopaths, Naturopaths, Chiropractors and anti-vaxxers the world over are celebrating this as a huge victory.

“Even though my son was showing signs of autism before he got vaccinated, I know in my gut and in my heart that it was still the vaccines that caused it,” said mother and anti-vaccine advocate Cheryl Jones.

“This is a big win for us,” said Naturopath and homeopathy dispenser, Paul Theroult. “I have seen it many times. I sell my patients a homeopathic remedy – for say the common cold- and then bam, they are cured within one to two weeks. There is no science backing up my claim that the homepathic pill cured their cold, but in my gut I just know it did.”

From The Spudd. HT Open Parachute

January 16, 2015 How To Tell You're A Professional
Recent Comments
2 Comments | Leave a Comment
Browse Our Archives
Follow Us!