LOST Rewatch: Flashes Before Your Eyes

The episode begins with Charlie searching through Sawyer’s stash of stuff. Desmond asks Charlie and Hurley to come with him. Locke and Sayid break the news about Eko having died. Locke says, “The island killed him.” Suddenly Desmond sets off running through the jungle, jumping into the ocean and swimming to rescue Claire. Charlie shouts after him, asking him how he knew she was drowning. Hurley tells Charlie that Desmond can see the future.

Charlie brings Desmond a bottle of McCutcheon whiskey, and he laughs. Previously he had refused, saying he had spent too much time drunk lately, but when he found out what kind of whiskey it is, he accepted. They are hoping to get him to explain what happened when he turned the key, and how he now knows what is going to happen. He says Charlie doesn’t want to know.

We then see him turn the key, and then flashes of scenes from his life, and then we see Desmond lying in a pool of paint. He is in the apartment where he lives with Penny, having fallen while painting. But it isn’t a flashback, it is Desmond experiencing that moment again. He has deja vu moments, as the sound of a microwave is the same as the beeping in the hatch, and there’s a delivery for 815. Desmond asks Charles Widmore for permission to marry his daughter. Widmore takes a bottle of McCutcheon 60-year whiskey. A swallow is worth more than Desmond could make in a month. He says that sharing it with Desmond would be a waste and a disgrace to the man who made it. Widmore says Desmond isn’t worthy of drinking his whiskey, how could he ever be worthy of marrying his daughter. On the street, Charlie is singing Wonderwall. Desmond asks him how he knows him. His name is on a sign in his guitar – Charlie Hieronymus Pace. Charlie doesn’t remember. Desmond runs to ask a friend who is a physicist about time travel. They go for a drink, and his friend asks him if he is insane. Desmond asks him if it is possible that he is living his life over again. Desmond tells his friend what is going to happen in the soccer game on TV, but then it doesn’t. His friend tells him there is no such thing as time travel. He says true love can be just as unlikely, and so Des should stop messing about and marry Penny. In the next scene Penny tells Desmond she loves him, and next we see him in a jewelry shop. When he tries to buy an engagement ring, the woman behind the counter tells him he doesn’ t buy the ring – he has second thoughts, breaks Penny’s heart, goes to the island, turns the key, and if he doesn’t, we are all dead. Desmond suggests that she is his subconscious. She illustrates her knowledge of the future by pointing out a man with red shoes, who is then killed. She says that if she had warned the man he would have died some other way. She says the universe has a way of course correcting. And she says that pushing the button is the only truly great thing he will ever do, that that is his path. He takes the ring anyway, but stops by a poster saying that you can become a man you can be proud of. And then we see him and Penny take the photo he later has with him on the island. He tells her that he can’t take care of her and she deserves better. She mentions him “rewriting history.” He says they are not supposed to be together. He throws the ring in the river. Desmind goes for a drink, and then realizes he was off by a night, that he was right about the soccer game, and he can still change things. But trying to prevent Jimmy Lannon from hitting the bartender with a cricket bat, he gets his in the head himself, and the next thing he knows, he is on the island. He finds the crater of the hatch, and then his photo with Penny. He says, “Please, let me come back one more time. I’ll do it right this time…I’ll change it.”

Picking up where we were earlier, Desmond tells Charlie that when he turned they key, he saw flashes from his life, and the flashes have not stopped. He says that he wasn’t trying to save Claire. He had seen Charlie drown trying to save Claire, and earlier electrocuted. He says he has tried to save Charlie twice, but the universe has a way of course correcting. He says he is sorry, but no matter what he does, Charlie is going to die.

The episode provides an interesting exploration of precognition and prophecy, and the question of whether the future can be changed if we know what it has in store for us. The answer which LOST offers is both a “yes” and a “no.” We see this later on, when the attempt is made to prevent the incident and prevent themselves from ever coming to the island. They may not change things at all, but if they do to any extent, the universe course-corrects. What, if anything, explains the extent to which the universe seems to have a plan and adjust to ensure that it is followed in large measure if not in every detail?

It is important to note that Desmond sees his past, but he doesn’t actually change his past – we see this when Charlie remembers the day he was playing Wonderwall and it started raining, and there is no sign of Desmond. Nonetheless, Desmond does get a glimpse of the past and the future and of realities beyond his normal perception, as when Eloise Hawking – whom he had not yet met – is present in his experience. 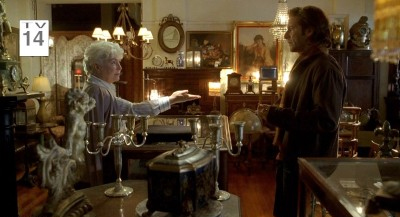 January 28, 2015 The Five-Fingered Theology of The Simpsons
Recent Comments
0 | Leave a Comment
Browse Our Archives
get the latest from
Religion Prof: The Blog of James F. McGrath
Sign up for our newsletter
POPULAR AT PATHEOS Progressive Christian
1