Scholar or Apologist? Why Not Both?

Scholar or Apologist? Why Not Both? February 16, 2015 James F. McGrath

Although this isn’t a case of “two great tastes that taste great together,” I’ve suggested before that “apologist” and “scholar” are not an absolute dichotomy, but a spectrum.

I think that point is relevant to the discussion that has exploded in the blogosphere, with Nijay Gupta, Mike Bird, Anthony Le Donne, Jonathan Bernier, Very Rarely Stable, and Gavin Rumney (twice), responding or reacting to a letter to the editor by Paul Holloway, in which he calls Wright a “book-a-year apologist” rather than a scholar.  A Ratzie was awarded for the discussion. 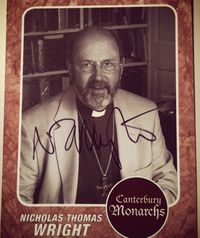 The truth is that Wright most certainly is an apologist. He does a little hand-waving and declares resurrections historical allegedly on the basis of historical considerations, and simply decides to accept one of the Pastoral Epistles as authentic with the only justification being that sometimes it is good to revisit an issue that has been considered settled.

But the truth is also that Wright is most certainly a scholar. He has offered detailed exegetical treatments of passages in Paul’s letters which have offered genuine insight into their meaning.

And so one can go back and forth on this without making any progress whatsoever, because both sides are right. And so the questions that actually need to be addressed are much harder. Does Wright’s apologetics undermine his scholarship? Do his ideological stances mean that he does not deserve an honorary degree?

I don’t think that Wright’s work is so easily dismissed. He has an obvious adherence to a historic form of Christianity. If someone rejects that particular tradition, it doesn’t make them ideology-free and unbiased. It may well simply mean that their ideology is different.

On the other hand, I don’t think that most secular universities would want to give a degree to someone whose stance is opposed to the kind of inclusiveness that they try to embody.

Sewanee, however, is not a secular school. It is an Episcopal university, and so for it to honor someone who has made an impact in that tradition is unsurprising.

One of the great things about the Episcopal tradition is that it can accommodate precisely these sorts of differences. It has room for both Wright and Holloway.

And so all I can hope for in this is discussion that may get us away from polarizing rhetoric which pretends that the only scholars are those who are free from all biases and ideologies. None of us are, and adopting that sort of stance simply means we are blind to our own situatedness. What makes scholarship work is not that participants are unbiased, but that for every Wright, there is a Holloway, and no claim which is driven solely or primarily by ideology is likely to go unidentified and unchallenged.