This is one of my favorite episodes. It begins with the group who were with John when he went down the well, and then they moved through time to a point before the well was built. They see the statue, completely intact. When John turns the wheel, there is one last flash, and then they are in another time. The well is back, but has been filled in. Juliette and Miles say that their headaches are gone. Juliette says that she thinks John did it, and it is over. Sawyer says that now they wait for him to come back, as long as it takes.

Then, three years later, we see two people dancing. Another man from the Dharma Initiative comes in, angry. On their security monitors, they see Horace blowing up trees with dynamite near the pylons of the sonic fence, and realize they need to go wake LaFleur and tell him. When they do, we learn that LaFleur is Sawyer. When Sawyer brings him home to Amy, he asks her what happened. She says they had a fight, about Paul. But then she goes into labor.

Three years earlier, the group is reunited with Daniel. He says he isn’t going to tell her. He says that she died, and then when the flash came, she was gone. Daniel says that whenever they are now, they are here for good. They head back to the beach, but then hear gunshots, and then a woman screaming. When Miles asks Daniel is they are not to get involved, Daniel says it doesn’t matter – whatever happened, happened. Sawyer rescues the woman, Amy, from Others who killed Paul, her husband. Amy says they have to bury the Others, and to bring Paul back home. She is worried about the truce. At the sonic fence, Amy takes ear plugs, and the rest of them are knocked out.

Three years later, Amy’s baby is breech. Sawyer goes to get Juliette, who is working as a mechanic. They normally have women give birth on the mainland. Juliette doesn’t want to help, since every woman she has tried to help on the island has died. Sawyer suggests that maybe whatever caused that hasn’t happened yet. Amy has a boy, and everyone is OK. Jin’s English is better, and we learn that he has been searching for the rest of their friends.

Three years earlier, Sawyer tells Horace the story he has made up, about being on a salvage vessel looking for the Black Rock. He says he is the captain, Jim LaFleur. Horace plans to send them to Tahiti in a submarine the next morning. Soon after, an alarm sounds and people run to their homes. Then Richard Alpert shows up, carrying a torch. Horace goes out to talk to him. Horace says that if he had known that Alpert was coming, he would have turned the fence off. Alpert says that the fence may keep other things out, but not them. Sawyer goes out to talk to him, tells him what happened, and shows through his knowledge about the Jughead and John Locke that he is not a member of the Dharma Initiative. The agreement is that the truce is preserved, but Alpert will take Paul’s body back, to show that justice has been done. Amy agrees, taking the ankh that Paul wore around his neck. Horace lets Sawyer and his friends have two weeks to stay and look for their crew. Juliette wants to leave, but Sawyer persuades her to stay for two weeks, until the next submarine departure.

Three years later, Sawyer and Juliette are living together as a happy couple.

Horace tells Sawyer that he found Paul’s necklace in Amy’s drawer, and that that is why they fought. He asks if three years is long enough to get over someone. Sawyer talks about having had a thing for a girl once, and now he can barely remember her face, and so three years is absolutely enough. The next morning, the phone rings. Jin has found Hurley, Jack, and Kate. 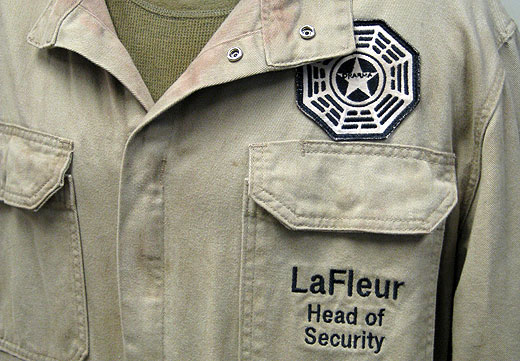 March 29, 2015 John the Baptist's Bones, Serapion, and the Mandaeans
Recent Comments
0 | Leave a Comment
"Li Hsen Chang only speakee in pidgin around people who expect him to. At all ..."
John Knowles Doctor Who: The Talons of Weng ..."
"What does the link to your blog have to do with this blog post?"
James F. McGrath The Most Extraordinary and Implausible Inventions ..."
"Probably the foundational truths that need to be taught is rightly dividing the Word of ..."
David Tiffany The Most Extraordinary and Implausible Inventions ..."
"Derp now anyone who advocates a 2 state solution is a Zionist like Chomsky.Meanwhile Israel ..."
Bones Academics and the Israel-Palestine Conflict
Browse Our Archives
get the latest from
Religion Prof: The Blog of James F. McGrath
Sign up for our newsletter
POPULAR AT PATHEOS Progressive Christian
1