A colleague drew my attention to this infographic which claims to show the evolution of major religious traditions (click through to see the whole thing): 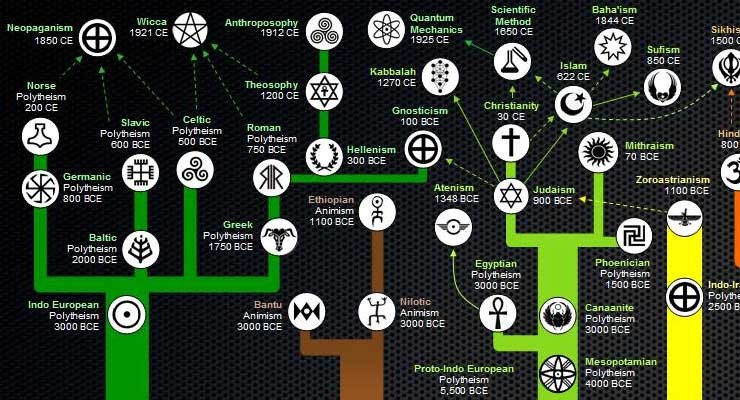 Some parts strike me as quite bizarre – Hellenism as a religion, and a precursor of Theosophy while Gnosticism is off on a separate branch. Some are probably more accurate than some would admit – Canaanite polytheism as the ancestor of Judaism. Some reflect a view that some might share, but a group itself would not – such as the listing of Sufism as a separate religion from Islam. And some must be deliberately tongue-in-cheek, such as the inclusion of the scientific method and quantum mechanics.

Had you seen it before? What do you think of it?

If you are interested in infographics about religion, you should also definitely check out one that the National Post shared a couple of years ago.

April 16, 2015 Talpiot Tomb Geology
Recent Comments
11 Comments | Leave a Comment
"Thanks! I'm familiar with Papoušek and Andreev, and still trying to get hold of Thrower. ..."
Mark Mythicism, Monotheism, and Mandaeism
"Oh I definitely agree that the Khrushchev Thaw basically created a more open battlefield and ..."
Chris H Mythicism, Monotheism, and Mandaeism
"Wow, I've consulted TARDIS Eruditorum before but hadn't read the entry on Logopolis. Amazing! I ..."
James F. McGrath Doctor Who: Logopolis
"Out of interest, have you read Elizabeth Sandifer's TARDIS Eruditorum? It's a series discussing Who ..."
Scurra Doctor Who: Logopolis
Browse Our Archives
get the latest from
Religion Prof: The Blog of James F. McGrath
Sign up for our newsletter
POPULAR AT PATHEOS Progressive Christian
1