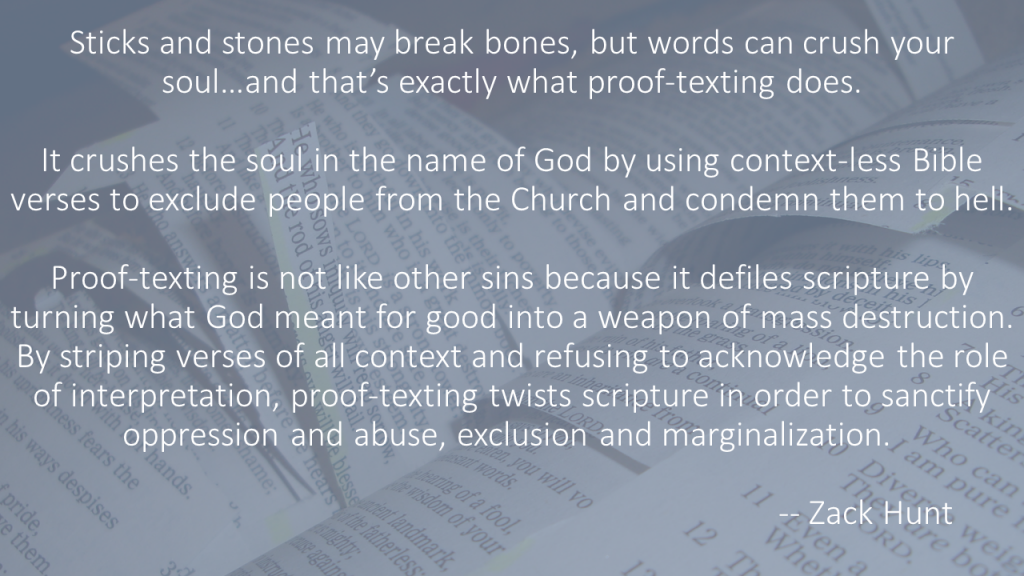 The quote is from Zack Hunt’s blog post, “Why Proof-Texting Is Not Like Other Sins.” It was hard to choose an excerpt to feature in the image. The whole thing is wonderful, powerful stuff, that deserves to be widely read. And so below it is quoted in its entirety, in the hope that it will lead more regular readers here to subscribe to or otherwise regularly read Hunt’s blog:

It’s entitled “Why Homosexuality Is Not Like Other Sins” and it’s the typical sort of fare you might expect from a site like Desiring God: bolstered by false equivalencies, society is portrayed as the boogyman out to destroy the faith, conservative evangelicals are cast as the real Christians who must speak up to save the day, and to do so, this heroic remnant of faithful believers are called upon to show their love by condemning people to hell for who they love.

All of this is done, of course, under the guise that the Bible is clear and here’s the verse to prove it!

This sort of proof-texting – ripping a Bible verse out of context to prove a point – is the traditional weapon of choice in fundamentalism because it allows the soldier who wields it to destroy his or her enemy with a signal verse while claiming the impenetrable high ground of clear Biblical authority.

Of course, this army of righteous crusaders who wage war against the “gay agenda” are infamously silent on a whole host of other issues the Bible is equally clear on when proof-texting is the name of the game. For example, when it comes to things like supporting slavery, killing disrespectful children, forcing women to cover their heads in public, and drinking wine every day, these holy warriors are conspicuously silent on these clear biblical mandates.

Perhaps it’s because the Bible is rarely as clear as they want or need it to be?

Regardless, the real problem in articles like the one mentioned above is not just that the Bible is rarely as clear as some folks pretend it is. The bigger issue is the fact that the Bible can only be so seemingly clear when scripture is intentionally abused and distorted through proof-texting.

Proof-texting is an intentionally deceptive practice that offers out of context proof while ignoring the greater witness of scripture and any other evidence that might rufute the desired (and predetermined) theological conclusion. It’s the tool necessary to perpetuate the myth that the Bible is always perfectly clear about everything, when in fact that clarity often only exists when we proof-text our theology by ignoring the overarching themes of scripture in general and the message of Jesus in particular in order to condemn and exclude people we’ve deemed unworthy of salvation.

And therein lies the truly nefarious nature of proof-texting.

Sticks and stones may break bones, but words can crush your soul…and that’s exactly what proof-texting does.

It crushes the soul in the name of God by using context-less Bible verses to exclude people from the Church and condemn them to hell.

Proof-texting is not like other sins because it defiles scripture by turning what God meant for good into a weapon of mass destruction. By striping verses of all context and refusing to acknowledge the role of interpretation, proof-texting twists scripture in order to sanctify oppression and abuse, exclusion and marginalization. This can be seen clearly through its history as the sanctifying force behind slavery and genocide, the rejection of women’s suffrage and embrace of Jim Crow, exploitation of the natural world and the denial of LGBT equality.

Proof-texting exists almost exclusively as a means of excluding undesirable people from the community of faith, from Christian universities, and ultimately, from heaven itself.

Which is ultimately what makes it antithetical to the gospel.

In other words, proof-texting is not like other sins because its end goal – condemnation and exclusion – is fundamentally opposed to the ministry of Jesus who came not to condemn the world but to save it, all the while intentionally embracing those the rest of the world – particularly religious folks – wanted nothing to do with.

Now, the unfortunate propensity towards proof-texting of some doesn’t mean the rest of us shouldn’t use scripture to support our position, but we must do so responsibly, incorporating things like context, history, science, experience, tradition, and reason to do the necessary and unavoidable work of biblical interpretation. Otherwise, our biblical interpretation and theological conclusions will lack integrity.

It’s true that biblical interpretation is hard work that rarely provides easy answer, but the alternative is nothing short of sinful.

Because when you lazily proof-text your theology, you’re not opening people’s eyes and saving them from hell. And you’re certainly not taking a stand for the truth.

You’re abusing God-breathed scripture and the people it was meant to serve.