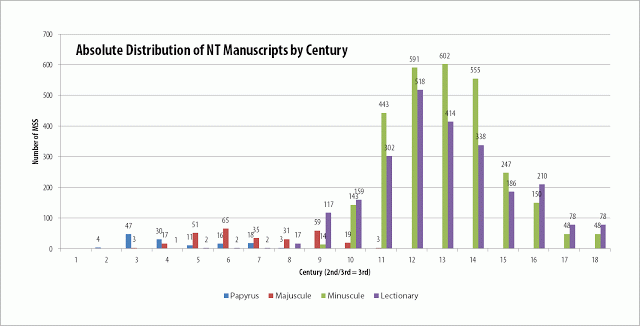 Peter Gurry shared the above image graphing the number of manuscripts we have from each century. Keep in mind that centuries are a convenient timekeeping device, and it is not as though a manuscript copied new year’s eve on the last day of the second century is more valuable than one copied the following day. In fact, we often cannot date manuscripts with such precision.

The graph hopefully illustrates why the apologetic argument that appeals to the sheer number of manuscripts we have of the New Testament is misguided. The quantity of manuscripts isn’t what matters. I could make more copies today, but it would not make our knowledge more reliable!

On the other hand, if one compares the dates of our oldest manuscripts to the oldest copies we have of other ancient literature, it quickly becomes clear that excessive skepticism, because our earliest copies are a century or more after the time in which they were written, is equally dubious.

Having a large number of manuscripts, or early ones, does not tell us that what is recounted in those manuscripts actually happened. And so we have good reason to conclude that the New Testament as we now know it resembles what its authors wrote, but that is just one step out of many for those interested in historical questions about early Christianity.