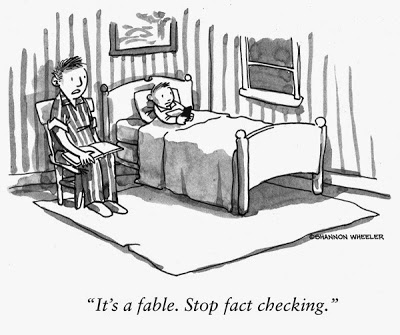 When the above cartoon appeared on Gavin Rumney’s blog, it struck me that it is a great depiction of the viewpoint of a variety of fundamentalisms. The cartoon captures as well the fact that, while the one who is fact-checking might believe themselves to be wise, they are in fact immature, and failing to appreciate the importance of genre.

Gavin also drew my attention to the following quote, which makes the same point:

“Both theists and most of today’s agitated atheists get a failing grade in literary criticism, the atheists by obsessing over the dogmas and the theists by mistaking metaphors for facts. Both miss the epic poetry that moves throughout the complex biblical literature.”

– Daniel Maguire, Christianity without God: Moving beyond the Dogmas and Retrieving the Epic Moral Narrative

May 11, 2015 The Black Knight Rises
Recent Comments
39 Comments | Leave a Comment
Browse Our Archives
get the latest from
Religion Prof: The Blog of James F. McGrath
Sign up for our newsletter
POPULAR AT PATHEOS Progressive Christian
1

Keeping Communion Holy
My son was very upset with his grandparents one Sunday morning. Their...
view all Progressive Christian blogs
What Are Your Thoughts?leave a comment
Copyright 2008-2021, Patheos. All rights reserved.