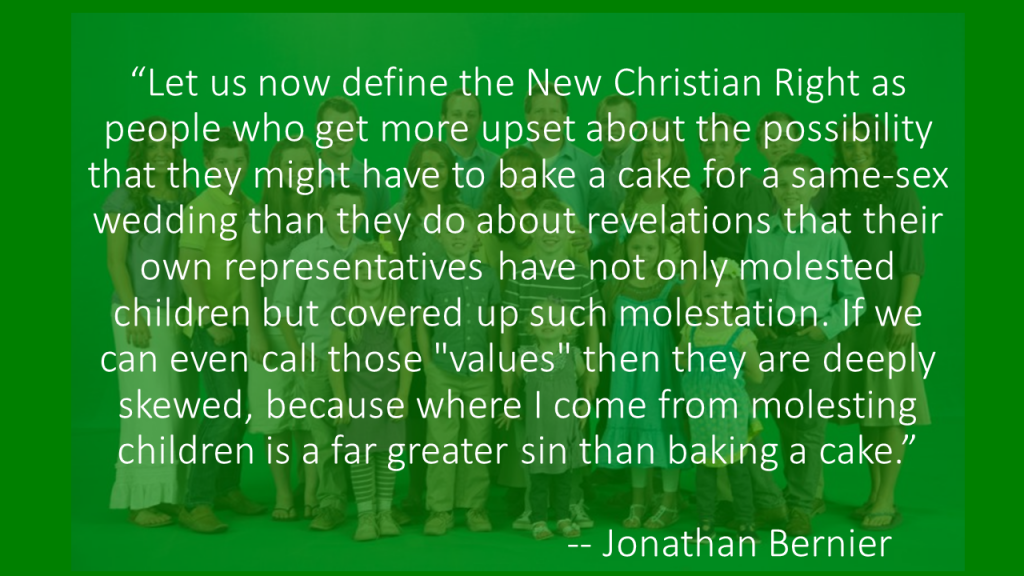 Let us now define the New Christian Right as people who get more upset about the possibility that they might have to bake a cake for a same-sex wedding than they do about revelations that their own representatives have not only molested children but covered up such molestation. If we can even call those “values” then they are deeply skewed, because where I come from molesting children is a far greater sin than baking a cake.

I disagree with Jonathan Bernier when he suggests that most people are basically either good or evil. I think the line cuts through each of us, and that relatively few of us are at the extreme ends of the spectrum. But I do think that, just as people can allow one or the other to predominate, so too organizations, societies, and movements can come to be predominantly evil or predominantly good. And his analysis of the problematic values of the “Religious Right” in America seems to me largely on target. Click through to read the rest.

May 29, 2015 Perkatory
Recent Comments
6 Comments | Leave a Comment
"Interesting point. But I think not entirely the one you intend. My conscience tells me ..."
JamieHaman Jesus Burdens Our Religious Freedom
"You're a tease, James, serving מָמוֹנָא of book and journal publishers."
robrecht The Writing on the Floor
"Wow, there are a lot of claims in there for which I can find no ..."
James F. McGrath The Writing on the Floor
"You're the only one here who appears to be ignoring things. The texts included in ..."
James F. McGrath Tampering with the Words of the ..."
Browse Our Archives
get the latest from
Religion Prof: The Blog of James F. McGrath
Sign up for our newsletter
POPULAR AT PATHEOS Progressive Christian
1