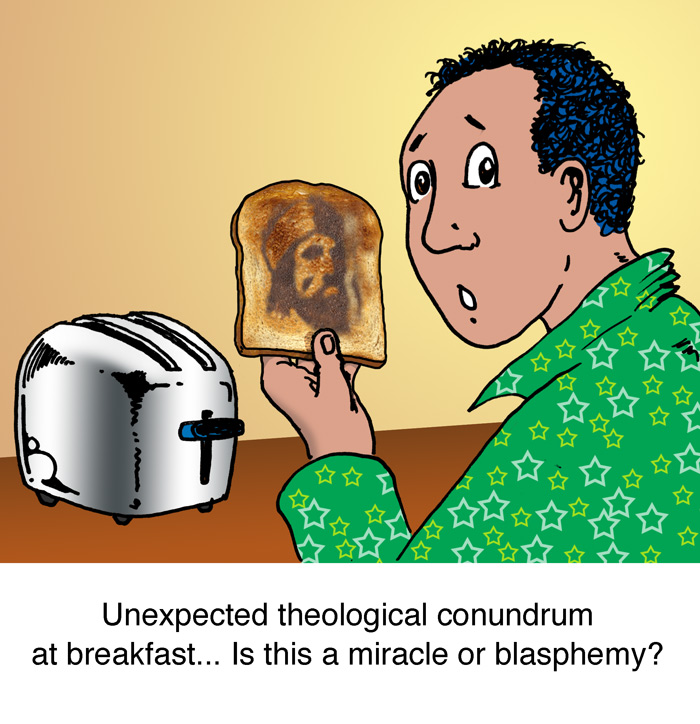 A cute cartoon from People in White Coats. Is this blasphemy, or a miracle – or can it be both?

While I probably would have shared it just for the punny title (mashing together pareidolia and idolatry), there is a serious point worth reflecting on – and not just about our human penchant to see patterns where none have been intentionally created.

And so the truth is that claims to the miraculous do not settle matters for most religious believers. Claims that conflict with one’s own tradition are dismissed as legends or lies or demonic deceptions.

And yet unless one is willing to take seriously similar criticisms of one’s own tradition’s claims about miracles, it would seem that one should be careful about making such criticisms of others.

Something about throwing blasphemous stones in miraculous houses…

May 4, 2015 And Also With You
Recent Comments
5 Comments | Leave a Comment
"Where have they stayed this? Can you provide some links or references? Thanks."
James F. McGrath Transgender and Christianity: From Andi to ..."
"The Kansas song is not about this. Both John Elefante and Rich Williams of Kansas ..."
Jon Transgender and Christianity: From Andi to ..."
"Before getting "Reformed," I went to a Plymouth Brethern meeting for maybe 10 years. I ..."
bill wald Trump as Antichrist
"When I first read the Book of Revelation I felt assured there could never be ..."
JAC Laferriere Trump as Antichrist
Browse Our Archives
Follow Us!