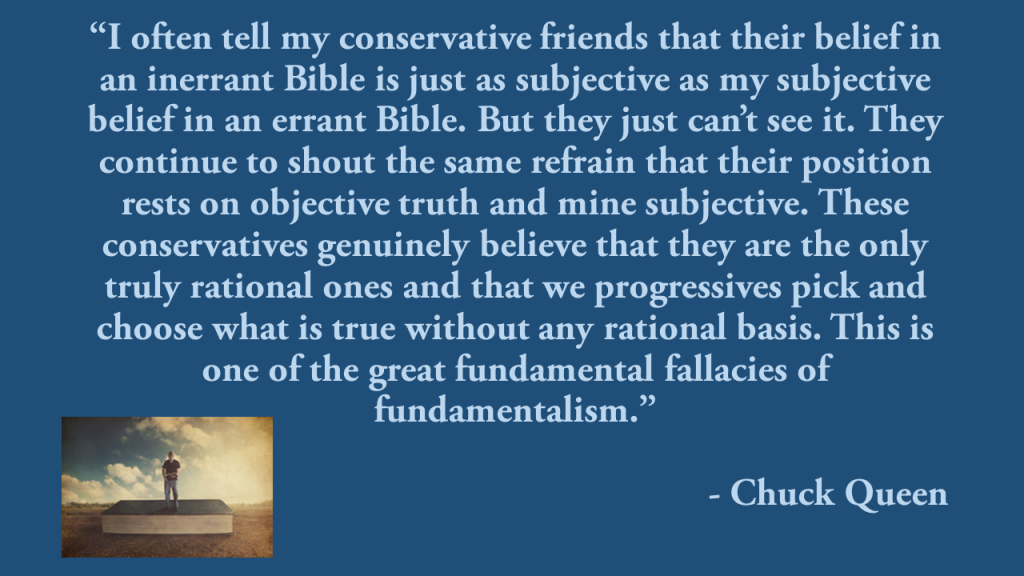 The quote comes from Chuck Queen’s post “Christian Fundamentalism’s Grand Illusion.” It makes a crucially important point. Fundamentalists turn to an inerrant Bible in an attempt to forestall discussion and avoid ambiguity. What they fail to acknowledge, and often do not even consciously realize, is that their belief in the Bible’s inerrancy is a subjective belief that they hold. And in this case, it is a belief that is at odds with the evidence and so in no way superior to the attempt to study evidence carefully and draw reasoned conclusions from it probabilistically.

They seek to avoid uncertainty, and end up with a worldview that is far more unlikely to be correct than the one they would have if they acknowledge the inevitability of uncertainty and used well-established means to try to account for it.

Of related interest, see Derek Penwell’s post on the Bible and same-sex marriage, in which he writes:

The act of reading the Bible in a modern context is an attempt to read over the shoulders of people who lived in a different world with a completely different set of expectations about what is possible, or what God could conceivably bless. In much the same way that it is possible to read the U.S. Constitution as addressing a completely different world from the one we inhabit (incapable of imagining the problems associated with living in the 21st century) but which embodies profoundly important principles, progressive Christians understand the Bible to contain profoundly important principles about justice and regard for others that can now be realized in ways that up until recently would have been culturally impossible.

Landry Wins American Express
Andrew Landry overcame a back nine collapse today to win the PGA...
view all Progressive Christian blogs
What Are Your Thoughts?leave a comment
Copyright 2008-2017, Patheos. All rights reserved.