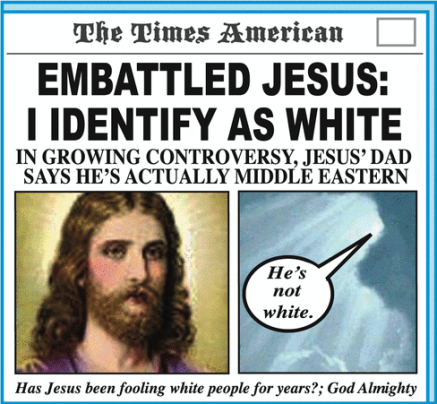 As a New Testament scholar who has blogged about Rachel Dolezal, racism, and the appearance of Jesus, I found this amusing – not least because the father who spills the beans is not Joseph, from whom Jesus would have inherited half of his Middle Eastern characteristics, but God.

There actually appears to be a religious dimension to the Rachel Dolezal case, with blogger Libby Anne suggesting that her parents broke the story to try to deflect attention from abuse accusations involving their family.

June 18, 2015 Worshiping Instead of Following
Recent Comments
98 Comments | Leave a Comment
Browse Our Archives
get the latest from
Religion Prof: The Blog of James F. McGrath
Sign up for our newsletter
Books by This Author Books by James F. McGrath