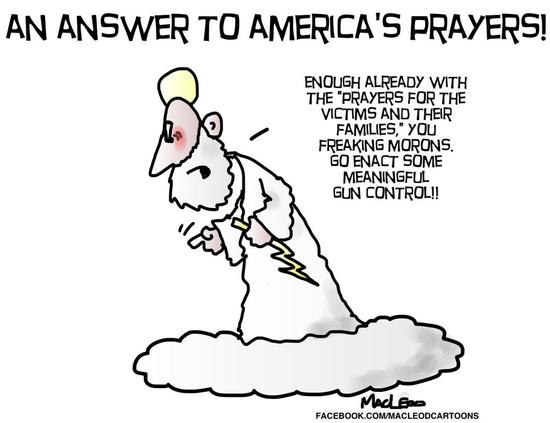 Both Hemant Mehta (who shared the above cartoon by James MacLeod) and Lauren Nelson blogged about the recent shooting in Lafayette, Louisiana, and their sentiments were along similar lines.

Prayer often emerges from a feeling of helplessness in the face of circumstances beyond our control. But prayers about shootings are like the person who prays not to get lung cancer and yet smokes, or who eats unhealthily and prays for good health nevertheless.

We are not helpless. We can go as far as we want in dealing with the reasons why gun violence is more common in the United States than in other, otherwise similar countries. Personally, I would rather see the second amendment to the U. S. Constitution repealed altogether, than see it implemented in the way it currently is, with guns easily accessible to all sorts of people who should not have access to them, from small children to angry white men and other terrorists. But if you don’t want to go that far, and are persuaded that the majority of Americans would not support such a move, then let’s figure out how far the majority of us are ready to go with respect to gun control, and then let’s go at least that far together.

Sometimes we must be the answer to our own prayers. The problem of gun violence in the United States seems like such an instance. But if you are going to do nothing, and persuade yourself that nothing can be done even though that clearly isn’t true, then what’s the point in praying?

Of related interest, if you haven’t seen it, you should read the 2014 article from The Onion on this topic: “‘No Way To Prevent This,’ Says Only Nation Where This Regularly Happens.”

July 24, 2015
The Importance of Theology and Science Fiction
Next Post

July 25, 2015 Science and Christianity in the U. S.
Recent Comments
121 Comments | Leave a Comment
Browse Our Archives
Follow Us!