While there is a Sunday worship service at Gen Con (which I didn’t go to), and on Friday there was a panel about Christianity and gaming, Saturday seems to have been “religion day” at Gen Con this year. There were three sessions dedicated to the topic of religion in gaming and fiction, and I made it to two of them. The third also looked interesting, but was aimed more at writers of fiction than at gaming.

The first was definitely one of the highlights of the convention for me. Rev. Scott Frazier offered the perspective of a college professor who teaches religion, who is also an ordained priest in a small Swedenborgian denomination (the General Church of the New Jerusalem), and who is an avid gamer, on the differences between religion in real life and in fiction and gaming. In role playing games, a character being a cleric means they can turn undead and heal wounds, but most players hope the DM will not bring up the god to which they are a devotee. Real world religions, on the other hand, have doctrinal debates and no shooting of magic missiles. Rarely does the religion of characters reflect the complexity of real life religion.

There were lots of interesting moments, including the discussion of the question of what evil is. A cleric character can cast “detect evil” and they will spot demons – but why not also selfish jerks? What defined evil in the world you have created? Who are the gods in your fictional realm – are they virtues personified, or are they like “teenagers with nukes” doing “frat-boy stuff”? There is a need to work out the “rules” by which certain things work. In the realm of Harry Potter, did the mothers of other people whom Voldemort killed not love them? Does a mother’s love give a +40 bonus on a saving throw? How does magic work in a religion? Is it handed down by an authority figure like a pope, with more of it going to bishops than priests? Or can someone who is viewed by the religious authority as a heretic still have access to spiritual power – and if so, what does that say about the nature of the religion?

A lot of aspects of RPG religion mirror ancient religion more than modern religion in the English-speaking world. Gods had particular domains they were connected with, and the relationships between them and humans were contractual in nature. And so I was thinking once again about how RPGs might help teach about ancient religions.

Rev. Frazier shared some useful questions to ask to help develop at least a small, coherent picture of a fictional religion for use in games or other storytelling.

The second panel featured two authors, both of whom as it happens have contributed to the Doctor Who Role Playing Game: Andrew Peregrine and Gareth Ryder-Hanrahan. Peregrine majored in religion at university, and talked about the work of Ninian Smart, and his seven-dimensional model of religion, and the fact that defining religion is a challenge. There were lots of interesting details in this session too, but one point that connected RPG gamemastering to teaching was the point that questions which are too open-ended will likely lead players – like students – to draw a blank and freeze. And so I think that for this reason if no other it is good for professors and other educators to continue to study – and not just on their own – and/or play RPGs.

Both sessions drew on serious academic study of religion and treated the subject matter in a manner that was well-informed and yet accessible to a general audience.

Let me conclude with a meme image that Jim Linville shared recently, which connects up with another theme that was explored in these sessions, namely monotheism as a problematic element in storytelling, and the aspects of polytheism which gamers often do not grasp sufficiently to explore them effectively in the stories they create through the RPGs they play: 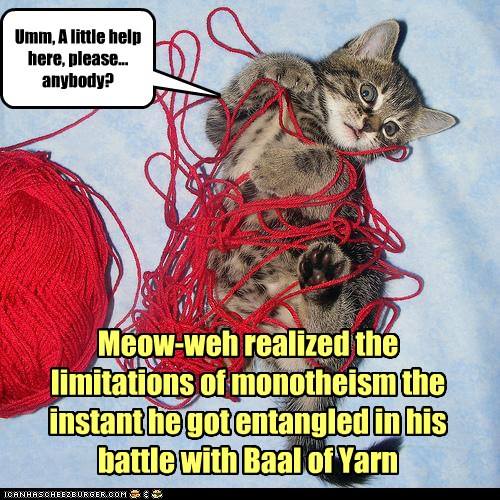