Our Children Should Always Be Allowed To Pray In Schools 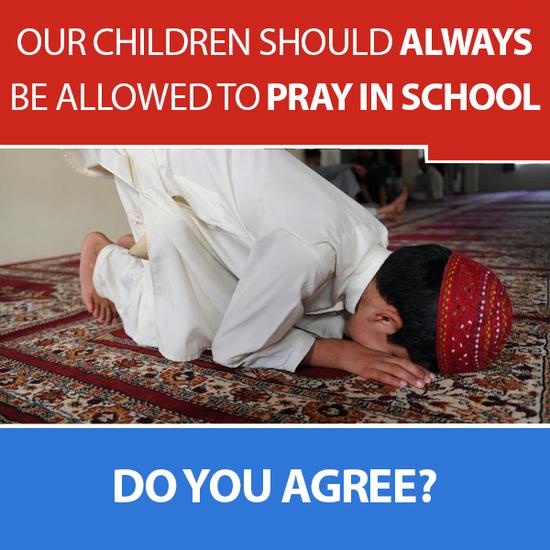 Hemant Mehta shared some nice reworkings of a popular right-wing meme about prayer in schools, which were created by Tracey Moody. All of the depictions of children praying in the memes on his blog are ones that he would support – except for the one in which a teacher is leading children in prayer, and thus imposing something on the inevitably diverse group of students. Children praying of their own initiative is not prohibited and never has been – nor will it ever be entirely absent, as long as there are students who believe in God and forget to study for exams.

Nevertheless, if a tradition only accepts prayer that is verbalized aloud, and requires this to be done at set times which conflict with classes, I could see issues arising at the intersection between the potential disruptions to the educational aims of the school and the religious freedom of students.

Be that as it may, Mehta’s aim is one that Baptists and other supporters of separation between church and state will concur with: formal collective prayer in school means prayer which reflects one particular sectarian approach, imposed on the group in a way that either mandates participation or shames those who do not participate. And when that is done, religious freedom suffers.

Click through to see more of the reworked memes.

August 27, 2015 You Can Ignore Your Law School Dean If What They Say Isn't Scriptural
Recent Comments
0 | Leave a Comment
Browse Our Archives
Follow Us!