After a delightful dinner, we returned to the main conference venue. Tony Burke introduced Ehrman, saying that he needs no introduction but it would be rude not to offer one. Burke said he is not one of the Johnny-come-lately Ehrman fanboys. He was a fan since The Orthodox Corruption of Scripture, and then Misquoting Jesus became a hit, and it was like being a fan of a band which then goes mainstream. The address tonight relates most directly to his recent book Forgery and Counterforgery.

Having been at a debate recently where the audience came hoping he would be defeated by his Evangelical debate opponent, Ehrman said it is nice to be at an academic conference. The focus of his talk is the character of forgery in the ancient world. Ehrman says the claim of the Jesus Seminar that the concept of plagiarism was unknown in antiquity is demonstrably false. Too many ignore forgery when found in the canon. But we also lack a universally agreed-upon taxonomy of forgery and related phenomena. For instance, the Acts of Thecla is an example of fabrication, not literary forgery. No one claimed that the Acts of Paul and Thecla were composed by Paul, or Thecla. We need categories that we agree on. Ehrman suggests a range of categories including, among others: Falsification, fabrication, pseudepigraphy, literary forgery, pen names, embedded forgery, redactional forgery, and non-pseudepigraphic forgery.

As an example of falsification, Ehrman looks at the sweat like blood in Luke, which was probably added by a scribe, as this is the only agony of Jesus in Luke. This is pretending that his addition is the work of the original author of the Gospel. And so scribes who made additions were engaged in falsification. Ancient Christians denounced those who tampered with texts. The question of intent to deceive is a separate issue from whether changes to a text, even if unintentional, are falsifications and deserve to be so named. It is also a fabrication, since it makes something up and presents it as a historical event. We have many stories and need categories for them. This is separate from the question of whether all history is on one level “fabrication.” Pseudpigraphy has to do with the claim that the author is someone who did not actually write it. Authorial claims are muddier waters. Ehrman suggests that we might distinguish between orthnomy, homonymity (e.g. the assumption that the John who wrote Revelation was John son of Zebedee), and anonymity, and then also pseudepigraphy, pseudonymity, forgery, and pen names. Anonymous works rarely remained anonymous, but there was no deceit on the author’s part even if there was later false attribution. Motives can be complicated – use of a pen name is explicable, for instance, in the case of female authors in a rigidly patriarchal context. Pseudonymity should be a broad umbrella term, with pseudepigraphy a subset thereof.

His main point, made more than once, is that we need a clear taxonomy, and so if you do not like the one he proposes, that is fine, as long as you propose something else, and ideally something better. It is also interesting that Tertullian claimed in the case of Mark and Luke that the work of disciples can be regarded as stemming from their masters. This does not mean what is sometimes claimed, as is clear from other things Tertullian wrote about false attribution. In context, he was saying that Mark and Luke gave the views of Peter and Paul, not that it would have beem OK for them to write in the name of Peter and Paul.

The epistle of Barnabas may be seeking to associate with Paul the opposite claim to Marcion, i.e. that the “Old Testament” is a Christian book and not a Jewish book.

Ehrman emphasized yet again that the ancient terms for forgeries are even harsher than that modern English term (e.g. nothos, “bastard”). If authors did not want to deceive readers into thinking they were someone else, they would not have written under the name of someone else.

There are three kinds of forgery which have rarely been identified as discreet phenomena: embedded forgery (inclusion of first-person narrative without differentiating speaker from author, leading reader to conclude that they are one and the same, as for instance in Ascension of Isaiah); redactional forgeries (a later editor or scribe adds an authorial claim to a text which did not do so originally, as for instance the Infancy Gospel of Thomas); and non-pseudepigraphic forgeries (e.g. Ecclesiastes, which never calls author by name but hints at being the wealthy son of David ruling in Jerusalem; or the Martyrdom of Marian and James). Literary fictions (e.g. a student given an assignment to write like Cicero – it could be literary fraud or mere rhetorical homework) and plagiarism also need to be mentioned. Plagiarism is in fact known and condemned in antiquity, called theft – one notorious ancient plagiarist also wrote a treatise On Virtue. Empedocles was expelled for commiting plagiarism. Would Matthew and Luke have been considered plagiarists? If an anonymous work uses another anonymous work without attribution, is it plagiarism? Some works do not line up nicely with taxonomies ancient or modern – but we need taxonomies nevertheless. Ehrman suggests that forgery as a term should indicate intent to deceive. “Deceit comes in many guises” (in view of the topic, let me say emphatically that that is a quote from Bart Ehrman).

There was time for questions. Philip Harland (a fellow blogger whom I met in person for the first time earlier today) asked the first question, and it was about the use of value-laden terminology in reference to literature. The fact that Tertullian viewed things in a particular way does not mean that modern scholars should take sides in his ancient battles. Ehrman replied that he does not know of any instance of people approving the practices that at least some condemned as forgery. No one says that writing in the name of someone else is an acceptable practice – not just when they disagreed with the content. See Diogenes Laertius. Harland said that the fact that some did it indicates that people did not think it was wrong. Ehrman responded that people commit adultery while knowing it is wrong. Intention is what you want to achieve, motivation is why you want to achieve it. Ehrman says that people want to deceive, but sometimes there can be a noble lie. I really want to propose a scenario in which Nazis knock on your door and ask “Did Paul write the Pastoral Epistles.” Brent Landau asked about the parable of the good Samaritan, and Ehrman said that parables are a known literary form and so were not to be mistaken for history. I was also tempted to ask about “thus says YHWH” in the prophets and where that falls in the proposed taxonomy, if anywhere, since if he would not object to someone genuinely beleving they head from the LORD writing that way, why could someone not believe that they had had divinely revealed to them what Thomas or Paul had done? Pierluigi Piovanelli suggested that switching between “they” and “we” is a common feature and so need not be considered a kind of forgery. I found myself thinking about a bit of satire based on the Ashley Madison website hacking, in which it is exposed that various Christian leaders were looking to write texts in the names of other people. In the discussion, it was interesting that Ehrman was less inclined to categorize prophetic books like Jeremiah as involving deceit. Tony Burke asked where self-deception fits into the picture. In response to another question about the role of secretaries and scribes, Ehrman mentioned that Morton Smith took more or less the same line that he does, that these kinds of works are forgeries. Carrier Schroeder asked about methodology and what is achieved by catgorizing deceit. Ehrman responded by saying that one aim is to identify who is being deceitful, whether the author or someone subsequently. Hebrews is a different case than 2 Peter. If someone thinks an anonymous work sounds like a particular author and proposes that they are, it might be deceit in a sense, but it is not necessarily something that is morally blameworthy and deserving of condemnation. The last question was from Stan Porter, about how plagiarism relates to intertextuality. Ehrman concluded by acknowledging that ancient people may have thought things for which we do not have evidence, but historians must go with the evidence. 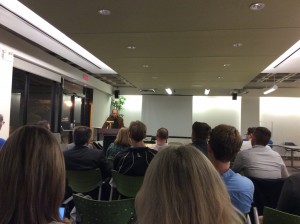 September 26, 2015 Ahab and Jezebel in Psalm 45
Recent Comments
19 Comments | Leave a Comment
Browse Our Archives
get the latest updates from
Religion Prof: The Blog of James F. McGrath
and the Patheos
Progressive Christian
Channel
POPULAR AT PATHEOS Progressive Christian
1

5 Books That Can Change Your...
All Set Free
Books by This Author Books by James F. McGrath