Doctor Who: The Witch’s Familiar

I apologize for not blogging about “The Witch’s Familiar” sooner – it was airing while I was traveling back from a conference. The title of this episode is no more self-explanatory than the previous one. My hunch is that both are veiled references to Clara Oswald – the Doctor’s apprentice, and yet said by Missy to be “the puppy” in relation to her and the Doctor’s relationship as friends. SPOILERS AHEAD!

The episode begins with Missy having accomplished an escape from the Daleks for her and Clara which used a method the Doctor had once used. Clara’s ability to figure out how he did it (and thus how they did it), and what it is that keeps the Doctor alive in so many situations in which other clever people would die, echoes his words to Davros in last week’s episode: you ignore the odds against you and focus on the one in a thousand chance that you will survive. Missy refers to Clara at one point as a canary to her as a miner. Yet the Doctor, at the end of the episode, chooses Clara over Missy. And so it is clear that, while the witch (Missy) would treat Clara as a pet/familiar, the wizard (the Doctor, not just in this episode but frequently on Doctor Who) views Clara as apprentice and friend.

The episode has a number of nice elements. One is the exploration of how Daleks work on the inside. Clara tries speaking and in some instances it cannot come out the way she intends. “I am Clara” can only come out as “I am a Dalek.” And any expression of emotion, even “I love you,” comes out as “Exterminate.” Missy says that while the Cybermen suppressed emotion, the Daleks channeled it into a gun.

The way Davros speaks to the Doctor, even opening his actual eyes at one point, is surprisingly moving – especially when he cries and says that everyone should have a race to belong to. And so it actually comes as a jolt when we realize that, far from honestly wondering whether he had done the right things and whether he is a good man, Davros is seeking to channel the Doctor’s regeneration energy into himself and the Daleks. But (rather like the Seventh Doctor in a number of episodes) we learn that the Doctor had known why Davros really summoned him, and had a plan. Daleks never really die, and so Dalek sewers (which is the same word in the Dalek language as “graveyard”) are full of the slimy existence of Daleks that cannot live normally but nonetheless are not really dead either. That slime gets some of the regeneration energy too, and wreaks havoc on the city and the Daleks in it.

The ending was what I expected – that the Doctor would go back in time not to kill Davros, but to rescue him. This allowed the word “mercy” to be part of the Dalek DNA, which was how he was able to recognize that it was in fact Clara in the Dalek that Missy told him had killed Clara. Of course, the word “mercy” had been uttered by a Dalek before on the show, albeit not in the Doctor’s hearing:

Among the intriguing references for long-term fans of the show are the reference to a time lord prophecy about a hybrid race being created, with the possibility that that is why the Doctor went on the run; and also Missy’s reference to her daughter, and a broach the Doctor gave her. For those interested in the show’s religious themes, the explorations of compassion and mercy, as well as prophecy, are interesting. But perhaps most significant is the suggestion the episode makes that there is no simple black-and-white distinction between friend and enemy. Good and evil run through us all.

Despite being very serious and poignant in some of its themes, the episode also had moments of very clever humor – such as when Davros says he has brought the Doctor something of great value – the only other chair on Skaro! And of course, when the Doctor previously stole Davros’ chair it was also entertaining, as were many of Missy’s quips. 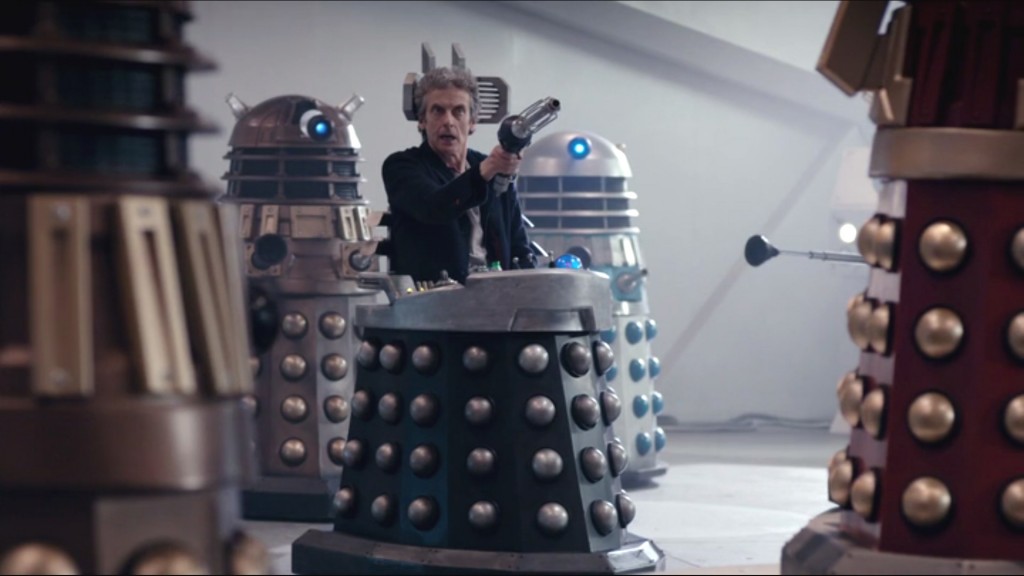 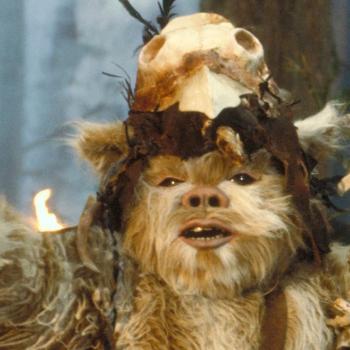