Give a Flying Flip 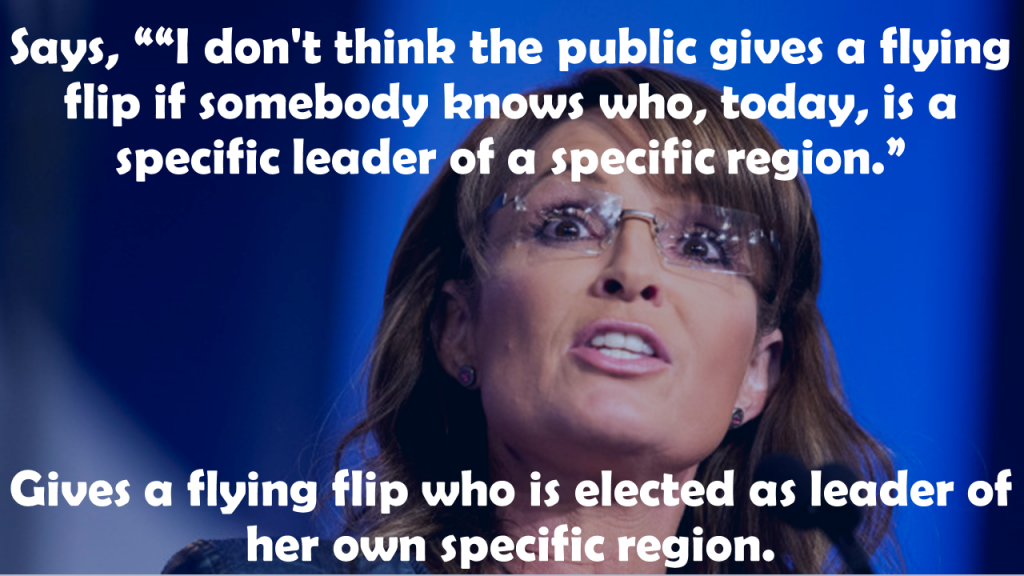 The quote is from something Sarah Palin said in response to criticism of Donald Trump not knowing the names of leaders of other countries. It seemed appropriate to point out the irony of her saying that people don’t care who the leader is, since the leader will change, when she cares very much who the leader is – and whether she is one of them – in her own region and country.

Trump himself apparently said much the same thing.

September 7, 2015 The Judgment of the Gods (The Graven Images Bible)
Recent Comments
5 Comments | Leave a Comment
"In the passage where he identifies as 'Benjamin' he seems to be claiming 'Israel' in ..."
Mark S “To Your Tents, O Israel!” A ..."
"You are the danger to this country, traitor. That is very obvious.Everything you say is ..."
Michel Understanding Whiteness
"No one was defending occupation of the West Bank. You should get treatment, I'm not ..."
Mark S Understanding Whiteness
"That's a great question to bring into this discussion! It is really hard for us ..."
James F. McGrath “To Your Tents, O Israel!” A ..."
Browse Our Archives
get the latest from
Religion Prof: The Blog of James F. McGrath
Sign up for our newsletter
Books by This Author Books by James F. McGrath