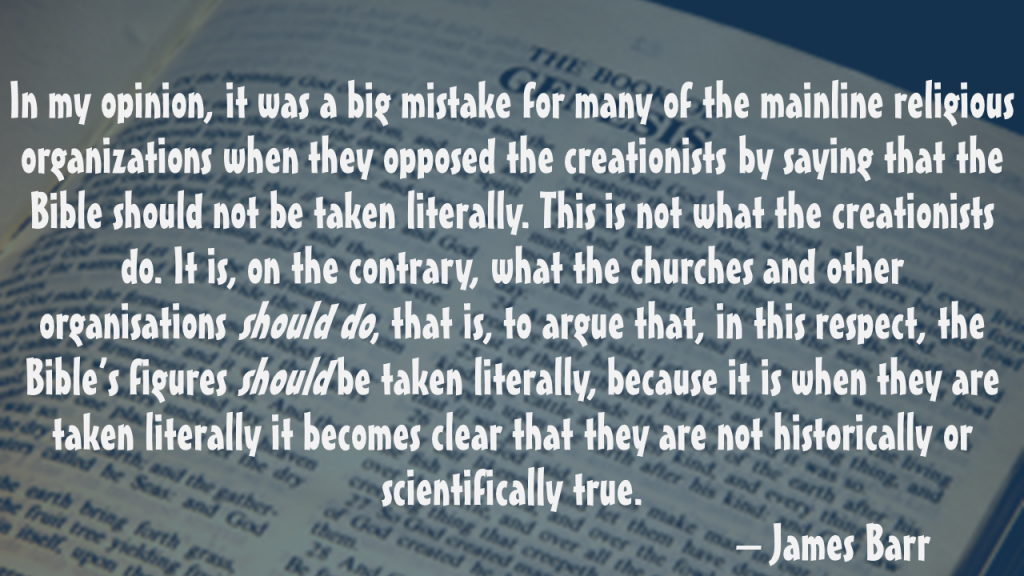 N. T. Wrong reminded me of this great quote from James Barr:

The point is a good one, and when liberal and progressive Christians say that the Bible should not be taken literally, they seem to mean precisely that – that the literal meaning is simply unacceptable, whether for scientific, historical, or ethical reasons. On that point, see the recent articles by Derek Penwell and Jennifer Grace Bird. What needs to be emphasized, in my opinion, is that, despite their claims, the fundamentalists are not Biblical literalists themselves. And the rhetoric of “literal” vs. “non-literal” can play into these false claims of fundamentalists. As Penwell writes:

What I want to challenge is the persistent and difficult-to-kill assumption that conservatives occupy some kind of religious and ethical high ground, and that any deviation from a particular kind of conservative orthodoxy isn’t merely a matter of interpretation, but is tantamount to initiating hostilities against God, motherhood, and the flag–all of which, interestingly enough, are conflated in some people’s minds. But that’s another article.

The smug certainty with which some conservative religious and political types believe not just that they occupy the side of truth on every issue, but that they occupy the side of God’s truth is alarming–not because they believe these things of themselves so uncritically (self-righteousness is a time-honored religious and political posture on both sides of the ideological divide, after all), but because so many in the culture agree to cede them this authoritative land of milk and honey.

Click through to read his whole article. And see too the post by Dan McClellan “On the Myth of Scriptural Literalism,” in which he writes:

Literalists are not literal about scripture, they’re literal about their ideology. Scripture is secondary. Religious groups don’t derive doctrine from the literal interpretation of scripture, they derive doctrine from negotiating between their group’s past, the needs of the present within a cultural context, and their interpretation (which is not literal) of scripture. It’s very important to keep in mind that that last item serves the other two. Scripture is the authority to which religionists appeal for their beliefs. It is not the source of their beliefs. It is flexible and ambiguous and malleable enough to say what religious groups need it to say. There are ideological literalists, and scripture is their paint and palette. There are no scriptural literalists.

Some part of that will definitely be turned into a meme here soon. In the meantime, click through to read the rest of the post.

September 1, 2015 How To Get The Least Possible Out Of University Religion Classes
Recent Comments
37 Comments | Leave a Comment
Browse Our Archives
Follow Us!