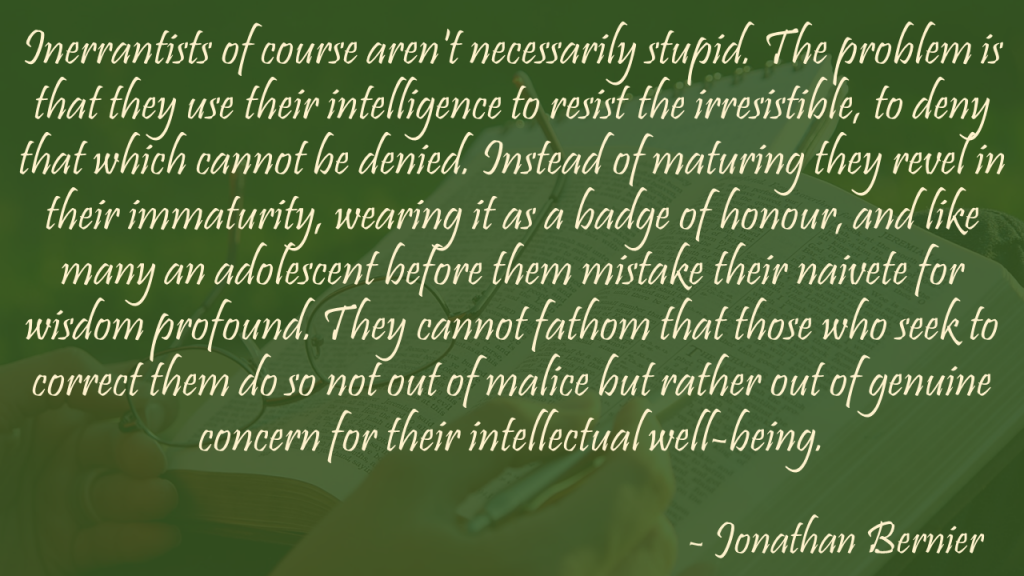 This is from a post with the title “Inerrancy as developmental disability.” See also Bernier’s post on one of the ironies about inerrancy.

Here is the larger context of the quote above:

[T]he doctrine of inerrancy…is an attempt, vainly, to resist adopting the language of development in order to explain entities that have clearly resulted from development. The vanity of it is obvious when you consider the lengths to which inerrantists must go to support their views (consider Ken Ham’s recent dabbling in a ridiculously accelerated rate of evolution in order to account for the diversity of animals that issues from the very small population that would have been on the ark; in order to exclude a reasonable account of biological development he must resort to an utterly insane account of biological development). It is a disability in the capacity to recognize the reality of development staring one in the face. It is moreover a developmental disability in a really quite literal sense: it reflects the failure of certain forms of religion to develop as did others through the course of the 19th and 20th centuries. Such disability is probably not biological in origin but rather cultural, the product of beliefs that make affirmation of the obvious an impossible.Inerrantists of course aren’t necessarily stupid. The problem is that they use their intelligence to resist the irresistible, to deny that which cannot be denied. Instead of maturing they revel in their immaturity, wearing it as a badge of honour, and like many an adolescent before them mistake their naivete for wisdom profound. They cannot fathom that those who seek to correct them do so not out of malice but rather out of genuine concern for their intellectual well-being. Ironically, the very thing that they deny will eventually select against them: development does not care whether you believe in it or not, but will simply leave you in the dust if you are unable to come to terms with reality as adequately as possible in your time and place. In denying what is obvious about the past they also deny themselves a place in the future.