Doctor Who: The Husbands of River Song

Tonight’s episode of Doctor Who works as a comedy episode throughout most of it, and then as a tender romance towards the end. Whether the combination of the two really works or not is hard to say, but the result was enjoyable even if it didn’t consistently feel believable even by Doctor Who standards – and Doctor Who is often outright comical and ridiculous.

The premise of the episode is that River encounters the Doctor, while under the impression that he can only ever have the Twelve faces that she knows about, and photos of which she carries with her. This ought to have seemed more believable within the context of the story than it did – after all, if you are sure that you have seen every face a particular time lord ever wore or could wore, you won’t expect them to show up wearing a new one.

The point of this premise is to let the Doctor see what River is like when he isn’t around. And at first, we are appalled along with the Doctor at River’s dalliances with other men. But of course, as we are reminded later, the Doctor has ended up married to other women, including Queen Elizabeth, Marilyn Monroe, and Cleopatra, and so they really are even in this regard. And so the episode, upon reflection, exposes our double standard in how we treat men and women in this regard.

Ultimately, we learn that River loves the Doctor more than she lets on, and is convinced that he is a timeless monument that can’t possibly feel the same way about her. And yet the Doctor, without saying it in so many words, shows that that isn’t the case. And interestingly enough, and in a poignant and touching manner, he does that by arranging to finally have that last night together at the Singing Towers of Darillium (including planting the idea to build the restaurant there, and making a reservation four years in advance, as well as giving her the sonic screwdriver that will back up her personality if not technically save her life).

River says that “happily ever after” is just (for mortals, at any rate) more time. And the Doctor does indeed find a loophole, despite insisting that it isn’t a permanent one. Indeed, they find two loopholes, since their last night on Darillium is the equivalent of 24 Earth years. And so they have more time than might have first seemed to be the case.

There are lots of other poignant moments in the episode: the suggestion that her time must be almost up, since the diary the Doctor gave her is almost full and he would have known how much space she would need; the moment when the Doctor says “hello sweetie” to River; and of course, when the Doctor says he is going to need a bigger flow chart to keep track of the twists and turns of their complicated time-traveling relationship. And, as an academic, I liked the statement that an archaeologist is basically a thief.

From a religious standpoint, the depiction of humans in the far distant future, on another planet, still celebrating Christmas is worth pondering in terms of its plausibility or lack thereof. And there is plenty to talk about in relation to ethics – property rights and archaeology, time travel and its implications for marriage, and so on.

When the episode was trying to be comical, and when it was being sentimental and romantic, it worked well. Initially, I wasn’t sure about the combination. But I have actually found myself liking the episode even more after reflecting on it while writing this blog post. What about you? 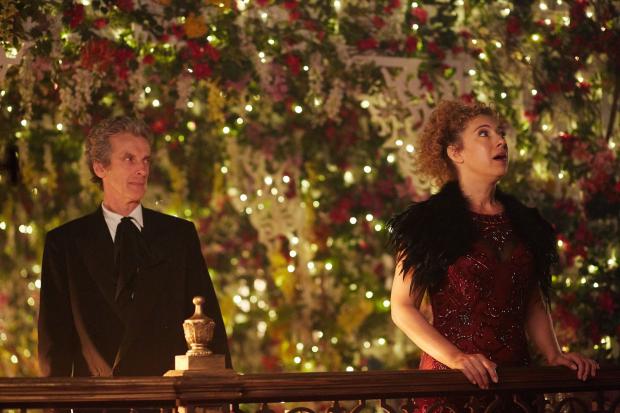 December 26, 2015 The Force Won't Fix This
Recent Comments
2 Comments | Leave a Comment
Browse Our Archives
get the latest from
Religion Prof: The Blog of James F. McGrath
Sign up for our newsletter
POPULAR AT PATHEOS Progressive Christian
1