Most of you will be aware that I was on sabbatical last semester. My department administrator used the term “sabbatitude” at some point early in the semester, and I liked the term, and so I thought I would use it in the title of this post, since every blogger who gets a sabbatical inevitably must post a retrospective. I hope I had the right sabbatitude going into it, and have come out of the experience of my second sabbatical with a good sabbatitude too.

During my sabbatical, I had two main book projects as well as some smaller projects I needed to work on. I got the latter done (apart from the ones I foolishly took on during my sabbatical) in the summer, and then in the Fall semester I spent my time working first on completing the Mandaean Book of John commentary and finding a publisher for what will be two print volumes (with critical edition, English translation, and commentary), and then on a short volume on theology and science fiction (which is almost complete).

I also needed to spend some time promoting the trip to Israel and the West Bank that I am running next summer, and apparently I was successful, as there are now 18 going – the largest group I've ever taken.

As mentioned previously, I aimed to lose weight and exercise more regularly.

I worked on music a bit more, in particular singing. I intended to finish learning Ravel's Pavane pour une Infante Défunte on the piano, but only ended up devoting relatively little time to that, and so that is the one thing that I can really say was a sabbatical intention that was a flop.

For those who wonder how I balanced sabbatical projects with blogging, the answer is that I regularly posted short memes or other things rather than long substantive posts, and I often scheduled posts a week or two in advance, and then left the blog to largely run on autopilot while I focused on writing.

Did the blog feel different these past several months?

To end with, here is a New Yorker cartoon from back in 2012, which bore the caption, “'How I Spent My Sabbatical,' by Professor Harvey Brinkman.” 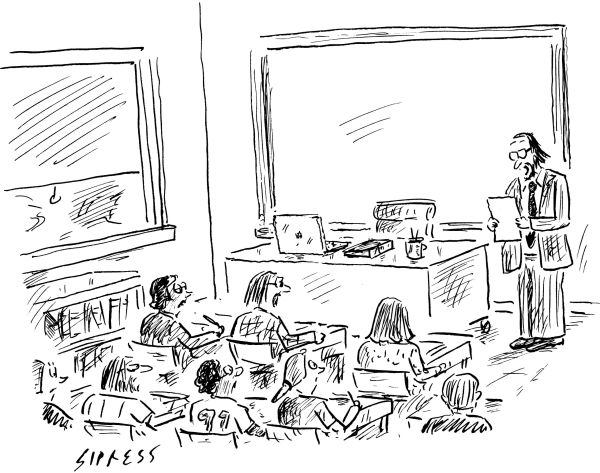 January 15, 2016
Not a Summary of Mark's Christology
Next Post

January 17, 2016 Methodological Atheism and Agnosticism in the Study of Religion
Recent Comments
0 | Leave a Comment
"Faculty in traditional professorial roles need to learn from librarians, who are well-practiced at educating ..."
Grimlock Coaching and Curation in the Post-Pandemic ..."
"James said"it suggests that the story was widely known and liable to be known not ..."
John MacDonald Revisiting the Empty Tomb
"It isn't just whether we see signs in our very earliest source that something was ..."
James F. McGrath Revisiting the Empty Tomb
"James, you're such a tease. I don't have time to read the whole book, but ..."
robrecht Veritas by Ariel Sabar
Browse Our Archives
get the latest from
Religion Prof: The Blog of James F. McGrath
Sign up for our newsletter
POPULAR AT PATHEOS Progressive Christian
1