Sarcasm is my Spiritual Gift

The title of this post comes from something that a church member said in a discussion of spiritual gifts in Sunday school a while back.

I think it would make a great t-shirt.

While acknowledging that the phrase “spiritual gifts” adds things not present in the Greek used by Paul, we still explored what the English phrase might denote. Of particular interest, I thought, was the possibility that the spiritual aspect pertains not to the source of the gifts, but the use to which they are put.

I also liked the phrase one retired Baptist minister used for the kinds of spiritual gifts Pentecostals focus on: he called them the “spooky gifts.”

The lists of spiritual gifts in the New Testament seem to me to be a selection rather than exhaustive – although that doesn’t necessarily justify adding sarcasm to the list.

What are your thoughts about spiritual gifts? As someone prone to sarcasm, I’d very much like to know whether it can genuinely be counted as a gift, or whether those who suggested it might be were being sarcastic… 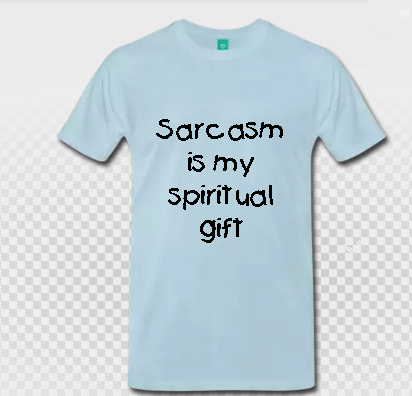