Venturing Outside One’s Area of Expertise

But I think the most important post on the topic is that by Jonathan Bernier. He points out that, once someone moves outside of their field of expertise, no matter how smart they are or how well informed about other topics, they are liable to make blunders. Here is an excerpt:

A number of interesting analogies can be drawn. I am a New Testament scholar and as such have the competence to speak with authority about the state of New Testament studies. The further one moves from that field the more reticent I become to do so. I have some but considerably less competence to speak about immediately adjacent fields, such as Hebrew Bible, Rabbinic, or Patristic scholarship. I have a degree in anthropology, and as such have more competence to speak to matters anthropological than most people, but significantly less than any working anthropologist. Get beyond areas of the human sciences, and beyond the human sciences itself, and my competence begins to drop off significantly. Sure, I can teach a first-year course in World Religions or a second-year course in New Religious Movements, but if someone asked me to teach a graduate seminar in Buddhism I’d laugh out loud. And that’s still within Religious Studies, the official title of my doctorate. Even within NT studies I’ve much greater competence to speak to historical Jesus or Johannine studies than to, say, Pauline studies. That’s because knowledge is specialized: one can learn a great deal about a very narrow amount of material, or very little about a lot, but one cannot learn a great deal about a lot.
Now, let’s think about many of the extremes of the new atheism. If Dr. Tyson, astrophysicist, is liable to error whilst speaking outside his area of specialization but still within the physical sciences how much more might a Dr. Dawkins, evolutionary biologist, be liable to error when he crosses into the social sciences or humanities? I’m sure that Dr. Dawkins could have been a fantastic scholar of religion, had he pursued such a specialization. But he didn’t, and he is no more competent to pronounce upon matters related to the study of religion than I am on matters related to the study of biological evolution. That’s why I won’t be writing any books on evolution any time soon. In fairness to Dawkins, fundamentalists opened the door by engaging in evolution denialism, but the fact that they have overstepped their competence does not give him grounds to overstep his own. The very fact that he and his followers seem unable to recognize theological diversity but instead think it adequate to critique a generic “theism” (by which they seem almost invariably to mean fundamentalist Protestant theology) speaks to the fact that such persons are very far out of their area of expertise. What you end up with is a whole bunch of people saying a whole lot of stuff about a whole lot of things that they simply do not understand.

Can you guess where the blog post goes next? Which topic, discussed frequently on this blog, he thinks this relates to rather directly? Click through to see if you were right. If you want another clue before you click through, here is another snippet: 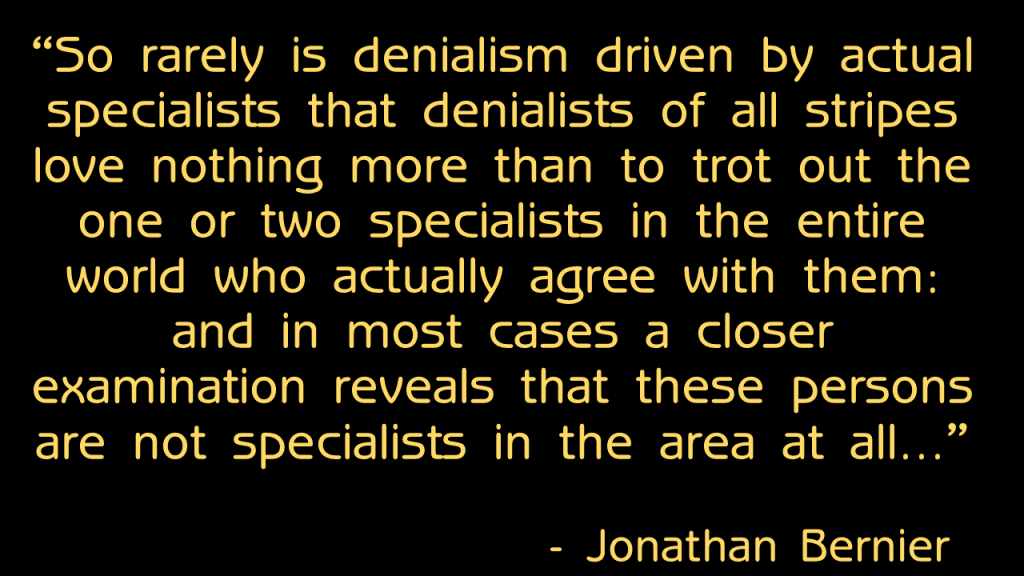 March 13, 2016
One Great Thing About Science Fiction
Next Post