DISNEY just issued a press release earlier today, to publicize a product that should appeal to both Star Wars fans and people of faith. The STAR WARS NEW TESTAMENT, which is subtitled the NEW YODA VERSION, will feature a creative adaptation of Jesus’ words, based on the New International Version. Sounds like fun! Here’s the full official text of the release:

To Hit Shelves in the US, Canada and the UK September 1

The NYV uses the English-language New International Version (NIV) as its template. Disney is partnering with HarperCollins Christian Publishing and Biblica – the worldwide publisher and copyright holder of the NIV.

Taking inspiration from the Star Wars saga, a team of biblical scholars and linguists familiar with Yodish (the language of Yoda) have translated the statements made by Jesus in the New Testament into Yodish. The project formally began after a meeting in late 2014 between representatives of The Walt Disney Company and the two publishers, and has taken over a year to complete.

When the NIV was revised in 2011, Professor of New Testament Studies Daniel B. Wallace stated: “It is a well-thought out translation, with checks and balances through rigorous testing, overlapping committees to ensure consistency and accuracy.” The head of the NYV committee, Professor of Systematic Theology Douglas D. Mark, remarked: “Several linguists proficient in Yodish were consulted, as well as George Lucas and Lawrence Kasdan, the co-writer of Star Wars: The Force Awakens. So we are very pleased with the result.”

Some examples for comparison:

“My kingdom is not of this world.” (NIV)

“Do not let your hearts be troubled.” (NIV)

“Your hearts troubled do not let them be.” (NYV)

“Do to others as you would have them do to you.” (NIV)

“For all who draw the sword will die by the sword.” (NIV)

“Die by the sword, all who draw the sword will.” (NYV)

“As I have loved you, so you must love one another.” (NIV)

“As loved you I have, so love one another you must.” (NYV)

“It is not the healthy who need a doctor, but the sick.” (NIV)

“It is the healthy who need a doctor not, but the sick. Yes.” (NYV)

“Blessed are the peacemakers for they will be called children of God.” (NIV)

“The peacemakers, blessed are. Called children of God, they will be.” (NYV)

“Ask and it will be given to you; seek and you will find; knock and the door will be opened to you.” (NIV)

“Given to you, ask and it will be. Find you will, when seek you do. Knock, and opened the door will be for you.” (NYV)

Yoda, a member of a mysterious species, first appeared in the 1980 Lucasfilm, The Empire Strikes Back. In the original Lucasfilms (Episodes V, and VI) Yoda trains Luke Skywalker to fight against the Galactic Empire. In the prequels (Episodes I, II, and III) Yoda serves as the Grand Master of the Jedi Order and as a high-ranking general of Clone Troopers in the Clone Wars.

The cover of The Star Wars New Testament: New Yoda Version (NYV) will include the iconic “Star Wars” © logo. Readers can choose between three versions: the words of Jesus appearing in normal black font, or highlighted in fluorescent green or fluorescent red font.

There are also plans to roll out the NYV in Spanish, Chinese, Hindi, Arabic, French, Italian, Russian, and Japanese over the next three years (2017-2019). The Spanish language edition is scheduled to be published in January 2017. 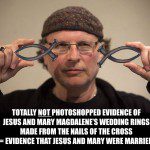