John the Jew: The 2016 Enoch Seminar in Camaldoli, Italy

The 2016 Enoch Seminar on Johannine Christology as Jewish messianism has begun, meeting not only the same building but the same room in which the Florentine Platonic Academy was born. I am delighted to have the opportunity to participate in it, and indeed to offer one of two introductory papers trying to set the stage and provide direction to the discussion. It is fascinating how many different attendees have highlighted the role of our attempts to define and delineate as the reason for some of our disagreements. When we talk about “Judaism” and John as “Jewish,” what do we mean? When we talk of the messiah as a “divine figure” what do we mean? When we talk about “monotheism” what do we mean? And even when we talk about the Gospel of John, the question of possible redaction and thus different views being represented within it has to be considered.

Daniel Boyarin’s controversial suggestion about the Israelite roots of the Danielic and thus Christian divine Messiah has come up several times already. I hope that at some point in the near future, perhaps we can have a conference exploring the question of the influence on second temple Judaism, Christianity, and Gnosticism of ideas that were preserved from pre-exilic Israelite religion beyond the bounds of or even deliberately against the imposition of Deuteronomistic reforms.

Jim Davila offered a summary of a recent symposium on divine sonship at St. Andrews and said that it will be in his blog by tomorrow. Interestingly, he also drew on social media to fill in details he missed or could not recall from that symposium. Shayna Sheinfeld has been tweeting about the conference.

I found myself having some interesting conversations about the different ways of being skeptical. On the one hand, many coming from a confessional background have tended to push back against our earlier uncritical assumption of the historical trustworthiness of the Gospels by doubting them in a particular way, e.g. by suggesting that Jesus’ predictions of the crucifixion and resurrection were entirely invented after the fact. But one could also be skeptical in another way, such as by accepting that Jesus said that he would rise from the dead, and treating that as the reason why his followers believed that he had been raised, even though they did not actually have evidence such as an empty tomb. They were expecting a resurrection, and so theypersuaded themselves that it had happened.

I am increasingly finding that I am open to being skeptical of the particular kinds of skepticism that I had recently taken for granted, and that neither radical skepticism nor uncritical acceptance does justice to the historical evidence in the New Testament. Clearly the early Christians were open to reinterpreting, modifying, and creating, but they also show some genuine concern for preserving teaching from and about Jesus. The challenge is not to manage to disbelieve it all or to believe it all, but to find the right critical balance between historical skepticism on the one hand, and the recognition that even after being studied skeptically in this way, some material makes better sense when it is judged historical rather than later invention.

It is only the first day, and the conversations we are having, the things I am learning, and the new thoughts that are occurring to many and perhaps all of us are phenomenal! 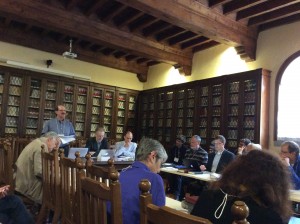 June 20, 2016 Jesus as Son of God
Recent Comments
1 Comment | Leave a Comment
"Under the old covenant (ten commandments), people were (and still are) racists and sexists. For ..."
Herrnhut Was Jesus a Racist?
"Reconciliation is a two-way street, restoring a broken relationship between two people. God does indeed ..."
Iain Lovejoy Forgive Us Our Debts, Not Repay ..."
"Excellent. God is not, and does not want to be, an accountant; keeping a ledger ..."
Harvey James Johnson Forgive Us Our Debts, Not Repay ..."
"Don't confuse forgiveness with reconciliation. Jesus tells us to forgive people who sin against us, ..."
Derek Thompson Forgive Us Our Debts, Not Repay ..."
Browse Our Archives
get the latest updates from
Religion Prof: The Blog of James F. McGrath
and the Patheos
Progressive Christian
Channel
POPULAR AT PATHEOS Progressive Christian
1