Rome in a Day, Part 1: An Overarching Arc of Arches and Archaeology

Rome in a Day, Part 1: An Overarching Arc of Arches and Archaeology June 19, 2016 James F. McGrath

I am in Italy for the first time, and will be heading to Camaldoli today by way of Arezzo to attend the Enoch Seminar on John’s Christology and/as Jewish Messianism. Jim Davila mentioned that the last time he was there the wifi was “primitive,” and so liveblogging the conference may not be possible.

Yesterday I spent the day squeezing in as much sightseeing as I possibly could (my phone’s health app tells me that I walked nearly 15 miles). I began with the Colisseum and the nearby Arch of Constantine. These enormous monuments are breathtaking when visited in person in a way that photos cannot do justice to. I bought tickets to the Colisseum plus the archaeological park that includes the Roman Forum and Palatine Hill, and to the Vatican Museum, online in advance. That was definitely a good idea, since there was still waiting in line for those who had advance tickets, but much shorter and quicker than the lines for buying tickets on site. I probably would have spent most of the day waiting in line had I not bought my tickets in advance. 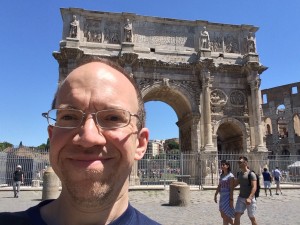 The line for the Roman Forum site was long, and separate from the Colisseum line, and it was midday, so I decided to go have lunch (more about that in another post) and then visit the Vatican and try again later. It was a good choice. I got back to the Forum site so late I was afraid I might have missed my chance, but instead I found there was no waiting, and although I was already tired, I went in, eager in particular to see the Arch of Titus, which depicts the Roman defeat of Judaea, taking captive not just people but also sacred objects such as the menorah from the temple, as you can see in the second of the photos below. 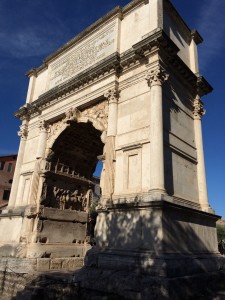 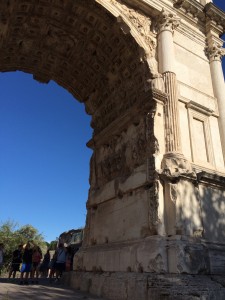 I will write additional posts about my visit to Rome (and I still owe readers some more posts about visiting Israel and Jordan). Some of my favorite moments were unscripted, when I simply popped into churches or a museum that I happened to be passing on my way. More on that soon! 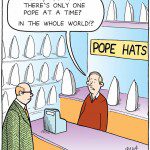 June 19, 2016 Father's Day Akedah
Recent Comments
3 Comments | Leave a Comment
Browse Our Archives
get the latest from
Religion Prof: The Blog of James F. McGrath
Sign up for our newsletter
POPULAR AT PATHEOS Progressive Christian
1