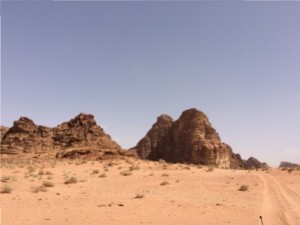 It will take some time to process and share many of the thoughts I had during my recent visit to many places I had been before in Israel and the West Bank, and to places I had never been before especially in Jordan. Among the latter was Wadi Rum, which I only learned after I was there was a location where filming was done for the movie The Martian. The landscape of red rock really does seem like it might be the closest one might find on Earth to Mars.

This area (which brought me within 17 miles of the border with Saudi Arabia) was part of Edom in ancient times. The red rock is presumably  the reason for the place receiving the name that it did – and so the idea that it got its name from a person named “Red” seems likely to be an aetiological story. The Israelites would have recognized that they were “cousins” linguistically and culturally with their neighbors in Canaan and the wider Levant, and stories were created to explain that. But sometimes they forgot their chronology – my favorite example being when the author of Genesis has Joseph’s brothers sell him to Ishmaelites (i.e. Arabs), forgetting that Ishmael was their uncle and so any descendants of Ishmael would have been their first cousins!

It took me surprisingly long for it to click that Amman is related ancient Ammon. Moab is also part of what is today Jordan, as is the region inhabited by the transjordanian Israelite tribes. It shouldn’t surprise anyone that, from a Jordanian perspective, their land is part of the “Holy Land.” And yet often that term is limited to Israel (including those territories which belonged to Jordan in the past but now no longer do).

Jordan includes many wide open spaces inhabited by the occasional bedouin. I found myself noticing how the later Israelite authors were aware of the nomadic lifestyle of their ancestors even after they had abandoned it. The patriarchs are always said to have pitched their tent, never to have built a house. One can dismiss the historicity of the details of a story, and still recognize that it preserves elements of accurate cultural memory.

Have you ever visited this part of the world, and if so, how did doing so  change your perspective about the Bible – or about Mars? 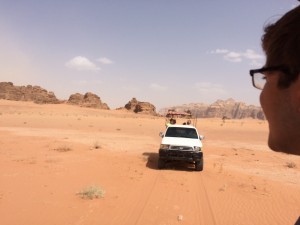 June 14, 2016 "What I Received From The Lord"
Recent Comments
5 Comments | Leave a Comment
"Sorry I didn't say congratulations right away!"
James F. McGrath Forgive Us Our Debts, Not Repay ..."
"I don't really have to. Hypocrites vigorously resist being shown to be wrong, and most ..."
Kyllein MacKellerann " QAnon Conspirituality and QAmerican Culture
"I'm not sure you'll convince anyone with that approach..."
Harold Porter QAnon Conspirituality and QAmerican Culture
"Support and responses:1> There is no means of currently making or injecting a microchip that ..."
Kyllein MacKellerann " QAnon Conspirituality and QAmerican Culture
Browse Our Archives
get the latest updates from
Religion Prof: The Blog of James F. McGrath
and the Patheos
Progressive Christian
Channel
POPULAR AT PATHEOS Progressive Christian
1