Two stories by Philip K. Dick (“Rautavaara’s Case” and “Faith of our Fathers,” both included in the collection Selected Stories of Philip K. Dick, with an introduction by Jonathan Lethem) explore alien gods and ideas of God. One contrasts the human image of Christ with the equivalent savior of plasma-based beings from Proxima Centauri. Whereas our human Christ offers himself to be eaten, intoning words from the Gospel of John, their Christ devours others. The other story envisages a world in which humanity has united under a Communist dictator whose true form is hidden from those he rules over.

The stories are striking because they capture an element of God as terrible and terrifying, utterly unhuman, in a manner that one can still encounter in the Bhagavad Gita, but which is largely neglected in the Biblical traditions in their modern expressions.

“Rautavaara’s Case” is particularly interesting because it is born out of Dick’s own religious experience and views. It relates to and explores ideas of religious possession, sacraments, and cross-cultural comparative theologizing. I am planning to add it to the reading list for my course on religion and science fiction, which I am teaching in the fall.

Have you read either of these stories? If so, what are your thoughts about their exploration of religion? 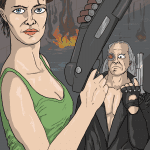 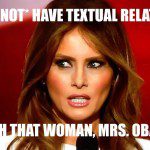 July 19, 2016 Melania Trump, Michelle Obama, and the Synoptic Problem
Recent Comments
0 | Leave a Comment
"I haven't seen his new show, but my favorite segment on the old Colbert Report ..."
John MacDonald The Truthiness Will Set You Free
"Where do you get the notion that people "allow" themselves to be oppressed? It is, ..."
Michel At What Point Repentance?
"Please go through my three papers on 21st Historiography"
Sujay Rao Mandavilli History and Creative Writing
"Yes, Trump's example teaches us to always remember that people can passionately will their own ..."
John MacDonald Fox News is Full of Sith
Browse Our Archives
get the latest from
Religion Prof: The Blog of James F. McGrath
Sign up for our newsletter
POPULAR AT PATHEOS Progressive Christian
1