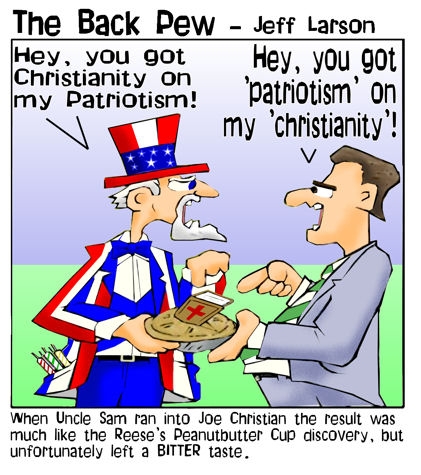 Roger Wolsey shared the cartoon above. In my Sunday school class yesterday, I found myself pondering the question of how faith and patriotism relate to one another.  The matter is not as simple even as my own American Baptist tradition might seem to make it by advocating separation. I do think that “separation of church and state” is the best approach. But surely that doesn’t mean that Christians and other religious people ought not to discuss and participate in the political life of the nation. And so how to do that in a way that protects religious freedom can still be challenging.

It is interesting to reflect on our celebration of the Declaration of Independence made by the American colonies in relation to Britain, even as Britain has declared its independence from the European Union. Has anyone else noticed the odd juxtaposition and offered some thoughts on what we might learn by considering the two together? 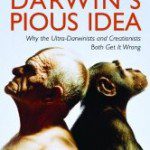 July 4, 2016 Darwin's Pious Idea
Recent Comments
2 Comments | Leave a Comment
"The audience certainly seemed to confirm the former for the most part. Some seemed to ..."
James F. McGrath Enoch Seminar 2020 #OriginsOfEvil2020 Day 4
"I hope to have something short appear in the not too distant future on the ..."
James F. McGrath Teaching about John the Baptist
"Yes!That was easy.But, all states already ban at least third trimester abortions except for maternal ..."
Sandy Plage Calling Trump an Antichrist
"Of course it is just a micro synopsis, but I wonder about the merits of ..."
Mark Enoch Seminar 2020 #OriginsOfEvil2020 Day 4
Browse Our Archives
Follow Us!