I agreed to review the NIV Cultural Backgrounds Study Bible by today, and although the print copy still has not reached me, I was given access to the ebook of the notes which are available through the Olive Tree app. The volume is edited by John Walton and Craig Keener, and published by Zondervan, and is due out later this month (although it is already available for pre-order on Amazon).

I found that the commentary was, on the whole, very useful, although not evenly so across the whole Bible. In some places, frequent references were made to relevant primary texts such as Philo or the Dead Sea Scrolls, while in others, the details about cultural values and customs were very brief, and no source was provided as evidence for the claims. I realize that a Bible with notes of this sort has to walk a fine line between giving enough information without overwhelming, and that it is aimed at a general audience rather than scholars. And so I suspect that most readers will feel that there is too much information in precisely those places where I appreciated that more was said! On the whole, that balance is probably achieved well for most readers.

Since it was impossible to read all the notes in the time available for the review, I had to be selective, and so I focused in on passages that I consider particularly interesting to me – such as the prologue to John – and ones in which I think cultural background information is especially important – such as the story of the prodigal son, in which I looked for evidence of the influence of Kenneth Bailey’s work, and happily found it.

From the introductory articles, as well as a few texts where there are historical issues that make conservative Evangelicals uncomfortable, it becomes clear that that is a major audience for which this study Bible is marketed. For instance, the reliability of eyewitnesses as sources for the Gospels is emphasized, and while it is not at all beyond the realm of scholarly possibility that eyewitness testimony played an important role in early Christianity, this is a subject of significant debate, and in my opinion, anyone who is digging beneath the bare surface of the Biblical text to ask about matters of cultural background, ought to be wrestling with historical issues as well. Here too, however, the treatment is not uniform, and one finds an acknowledgment of apparent historical discrepancies in some places – e.g. when Quirinius is mentioned in connection with the census in Luke 2.

There were some minor technical issues that affected functionality in the ebook version. On my iPad I found that some inserts – for instance, the two columns comparing Exodus 33-34 with John 1:14-18 – displayed oddly, as scrollable text embedded within the surrounding commentary, yet with nothing to single it out as such – other than the fact that it moved in a different direction from the text around it. On the other hand, one can split the app between two separate texts to have the Biblical text in one column and the notes in another, which is very useful. The notes include infographics and images in addition to textual commentary on key verses. Having looked at a preview of the print version that is available online, it seems far more straightforward to use, and interesting inserts with pictures and text, for instance about the Church of the Holy Sepulcher, offer things that I don’t ever recall seeing in a study Bible before.

On the whole, this looks like a very useful and important volume, which will serve typical readers of the Bible well. Compared to many other study Bibles, the amount of detail about culture, customs, and context is greater, and as someone who has found exploration of the cultural background of Biblical texts fascinating – and at times breathtakingly revelatory in the light that it sheds on their meaning – I am eager for more readers to begin to become acquainted with this kind of information. My biggest concern is that, in the detailed verse-by-verse commentary, many of the pieces of information will remain mere interesting nuggets, without readers always getting a sense of how this information might change the way one reads a particular story as a whole from start to finish. But it is to be hoped that those who start with the NIV Cultural Backgrounds Study Bible, like those who start with any other study Bible, will graduate from the kind of short commentary such volumes can provide, and move on from them to book-length treatments of individual books of the Bible or even individual stories.

If you are interested in cultural background to the Bible, you will want to pre-order a copy! 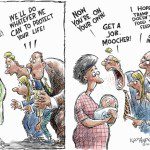 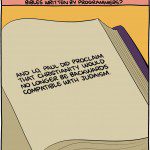 August 2, 2016 Paul the Programmer
Recent Comments
7 Comments | Leave a Comment
"African Americans are Americans, not Africans. It should not be suggested to them that they ..."
Roger Morris White Christianity and Disney Princess Theology
"It is ironic that the same people who can't let go of the Confederate past, ..."
CroneEver White Christianity and Disney Princess Theology
"Is this particular section of Jubilees preserved only in Ethiopic or perhaps Latin? It's not ..."
robrecht Was Paul Uninterested in the Historical ..."
"What actual tangible authentic and original first century originated evidence can you reference?Every word attributed ..."
rationalobservations? Was Paul Uninterested in the Historical ..."
Browse Our Archives
get the latest from
Religion Prof: The Blog of James F. McGrath
Sign up for our newsletter
POPULAR AT PATHEOS Progressive Christian
1