I just rewatched the science fiction movie The Black Hole, to introduce my son to it. I was particularly eager to see what I myself thought of the ending, and indeed whether it meant what I had interpreted it to mean when I watched it in my youth. And I wondered what my son would make of it, including whether the special effects that were so impressive in 1979 would have stood the test of time. 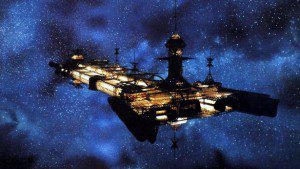 Religious themes permeate the movie from start to finish. Right near the beginning of the movie, Harry Booth says the black hole they have encountered is “straight out of Dante’s inferno.” Charlie Pizer says that every time he sees one of those things, he expects to see a big guy in red with horns and a pitch fork.

For those interested in ethics and artificial intelligence, the movie does very interesting things with robots and the possibility of the distinction between humans and robots being blurred in both directions. I had forgotten about the moments when Kate McCray communicates with the robot VINCENT using ESP. Charlie, and captain of the Palomino Dan Holland, in their conversation when VINCENT’s tether breaks as he is making repairs outside, treat the robot as one of the crew, although still not in the same way they would another human being. VINCENT himself talks about how humans used robots of his type in Project Black Hole to send ESP messages back from probes. Dr. Rheinhart, on the other hand, refers to VINCENT when addressing Maximillian by saying not to pick on small people. Yet he refers to having made “companions of a sort” to keep him company – ironically then referring to people that have been reduced to something closer to mere automata, although the fact that they hold something with “all the reverence of a human funeral” suggests that the transformation is less than complete. Harry looks into the reflective faceplate of one of the seeming robots, and talks about Rheinhart liking to play God. Much later in the film, Dan and Charlie risk their lives to save BOB.

Rheinhart also compares the face-off between Maximillian and VINCENT to the Biblical story of David and Goliath. VINCENT himself later mentions hating the company of other robots. BOB shakes nervously so that he rattles, while STAR  is an arrogant show-off who cannot stand to lose. And yet Alex Durant scoffs at the notion that Rheinhart would have programmed his robots to feel emotion. Science fiction movies often seem not to realize that they are depicting robots with emotions, even while depicting human characters as assuming that robots lack such characteristically human features.

Rheinhart offers a new power source capable of providing all the energy needed on Earth as evidence that the ends justify the means. He says that his plan to journey through the black hole will bring him to the place of ultimate knowledge. Alex says that Rheinhart will solve the one remaining mystery, a pilgrimage that might lead into the mind of God. Rheinhart then comes in and quotes from Genesis, and expresses his hope that through the black hole is a place where the laws of physics do not apply, and thus life unending. Rheinhart also says at one point “Some cause must have caused this – but what caused that cause?” After Maximillian kills Alex, Rheinhart asks Kate to protect him from Maximillian.

There is a consistent element of poetic justice in what befalls characters who act selfishly. Maximillian shreds through the scientific notes Alex is holding – the things that have led him to want to remain with Reinhardt on the Cygnus – before the blades plunge into him, killing him. Harry takes off in the Palomino on his own to try to save himself, and inadvertently saves the others. Reinhardt is surrounded by a crew that he has enslaved and which can no longer respond to his pleas for help after a large screen falls on him. As the remaining Palomino crew escape the Cygnus on a probe ship, only to discover that it has been programmed on a course into the black hole, they hold hands and in the last bit of spoken dialogue, pray that Reinhardt was a genius, whatever else he may have been. And then finally, we get a close up of Kate’s eye and then see Reinhardt first in hell, trapped in the body of Maximillian, and then his spirit freed to travel along a heavenly passageway. Is this supposed to be understood as simply what happens to him, what Kate senses with her ESP, or what she imagines? She had earlier said that if there is any justice, the black hole will be his grave. Perhaps it is simply poetic justice – he hopes to find life everlasting by entering the black hole, and ironically does, albeit precisely as a result of dying – not to mention dying before fulfilling his dream of entering the black hole, and so perhaps we are supposed to think of him as having discovered in death that what he lived for was misguided, and what he sought lay close at hand all along? Here is the scene in question, in case you don’t remember it:

I also watched the mini documentary feature on the DVD, “Through The Black Hole,” and was struck by the fact that the ending of the movie had still not been decided when they began production, but one idea was to have it feature the main characters looking at God on the ceiling of the Cistine Chapel – a mysterious, spiritual ending. Apparently the novelization by Alan Dean Foster did something slightly different than either the originally-planned ending or the movie, but with no less spiritual implications than either.

It is a rarity for the villain in a movie to be punished in hell at the end of it – and hell apparently also proves to be temporary, making the film theologically provocative for certain viewers. In all these ways, The Black Hole stands apart from all other sci-fi that I can think of, and most other movies (although apparently I need to see Event Horizon, which was presumably inspired by The Black Hole, and which I have never seen). The Black Hole is obviously a film worth discussing if you are interested in religion and science fiction.

Is it safe to assume that everyone reading this blog will have seen this movie, and loved it when they were young? Have you watched it since? Did you find that it stood the test of time? Were you surprised at just how much religious themes were woven through the entirety of the movie, and not just the ending? How do you feel that its story and the spiritual themes in it compare to the more recent Interstellar, for instance? 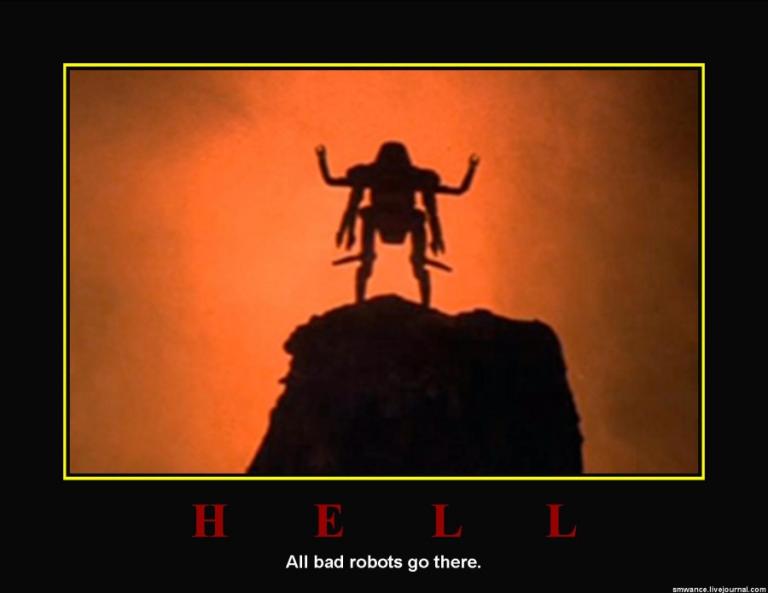 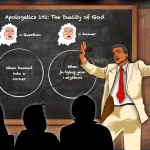 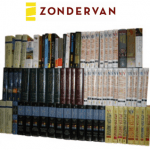