I was surprised to read a post by Richard Miller on the blog Debunking Christianity, which highlights the work of Rudolf Bultmann, only to really misunderstand/misrepresent what Bultmann was saying.

The question I pose here at Debunking Christianity is this: After following all channels and tributaries of such myths as one honestly interrogates the New Testament texts, what truths may one salvage through demythologization? Bultmann supposed there to be a kernel of truth latent within the New Testament documents. I question that, unless those truths about the human condition come quite inadvertently as one deconstructs and uncovers the underlying anxieties and requirements of ancient civilization, i.e., via study of the applied performative myths of ancient human civilization. Perhaps then, the biblical texts merit a special place in the ranks of other ancient literary works muddled in a benighted worldview altogether untenable in our modern age. 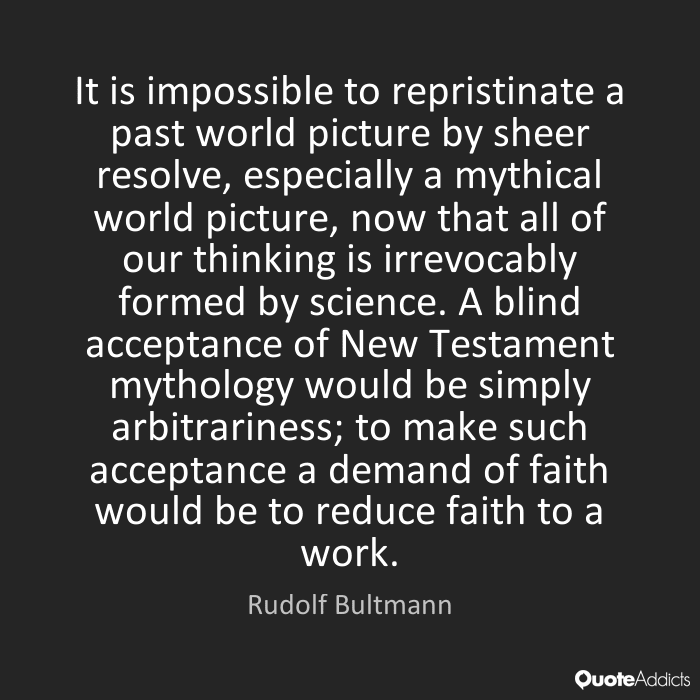 Bultmann was in fact directly opposed to the earlier liberal approach that thought you could merely peel off a shell of myth and discover a kernel of timeless truth. Let me share two longer quotations which, however dated they sound in their talk of what “modern man” supposedly cannot believe, articulate Bultmann’s perspective very clearly, and illustrate why his points retain their importance. Both are from his contribution to the volume Kerygma and Myth, which can be found online in more than one location, and which I highly recommend.

Whatever else may be true, we cannot save the kerygma by selecting some of its features and subtracting others, and thus reduce the amount of mythology in it. For instance, it is impossible to dismiss St. Paul’s teaching about the unworthy reception of Holy Communion or about baptism for the dead, and yet cling to the belief that physical eating and drinking can have a spiritual effect. If we accept one idea, we must accept everything which the New Testament has to say about Baptism and Holy Communion, and it is just this one idea which we cannot accept.

It may of course be argued that some features of the New Testament mythology are given greater prominence than others: not all of them appear with the same regularity in the various books. There is for example only one occurrence of the legends of the Virgin birth and the Ascension; St. Paul and St. John appear to be totally unaware of them. But, even if we take them to be later accretions, it does not affect the mythical character of the event of redemption as a whole. And if we once start subtracting from the kerygma, where are we to draw the line? The mythical view of the world must be accepted or rejected in its entirety.

At this point absolute clarity and ruthless honesty are essential both for the academic theologian and for the parish priest. It is a duty they owe to themselves, to the Church they serve, and to those whom they seek to win for the Church. They must make it quite clear what their hearers are expected to accept and what they are not. At all costs the preacher must not leave his people in the dark about what he secretly eliminates, nor must he be in the dark about it himself. In Karl Barth’s book The Resurrection of the Dead the cosmic eschatology in the sense of “chronologically final history” is eliminated in favor of what he intends to be a non-mythological “ultimate history”. He is able to delude himself into thinking that this is exegesis of St. Paul and of the New Testament generally only because he gets rid of everything mythological in I Corinthians by subjecting it to an interpretation which does violence to its meaning. But that is an impossible procedure.

If the truth of the New Testament proclamation is to be preserved, the only way is to demythologize it. But our motive in so doing must not be to make the New Testament relevant to the modern world at all costs. The question is simply whether the New Testament message consists exclusively of mythology, or whether it actually demands the elimination of myth if it is to be understood as it is meant to be.

And then continuing later, he adds:

It was characteristic of the older liberal theologians that they regarded mythology as relative and temporary. Hence they thought they could safely eliminate it altogether, and retain only the broad, basic principles of religion and ethics. They distinguished between what they took to be the essence of religion and the temporary garb which it assumed…

The meaning of these…types of mythology lies…not in their imagery with its apparent objectivity but in the understanding of human existence which both are trying to express. In other words, they need to be interpreted existentially.

One can argue with Bultmann over whether this existential reinterpretation of the Christian gospel is appropriate, whether it makes sense, and whether it remain the Christian gospel. But he is very explicit about the fact that he rejects the earlier liberal approach of Harnack and others which sought to peel off myth and find a core of timeless truth that could then be transferred into our time – a timeless truth which turned out, inevitably, to be a reflection of the values of the modern interpreters and their age. Bultmann instead asked whether the myth, as myth, nonetheless offered a challenge to human beings and a way of viewing human existence that could be reinterpreted and reexpressed as a whole.

And so I can’t understand why Miller presents his own view as though he were disagreeing with Bultmann about the problem of myth, and why he presents Bultmann as advocating the viewpoint that he actually argued against. Miller is free to reject the kerygma, the Christian proclamation, in the form Bultmann reinterpreted, and to do so for any number of reasons, whether the conviction that the approach is inherently invalid, or that Bultmann’s restatement of the message does not preserve essential elements of the historic Christian message, or that the reformulation isn’t meaningful to him, or that he simply chooses to reject it in his own act of existential decision. But Bultmann’s perspective deserves to at least be heard and understood properly before it is responded to in any of those ways. 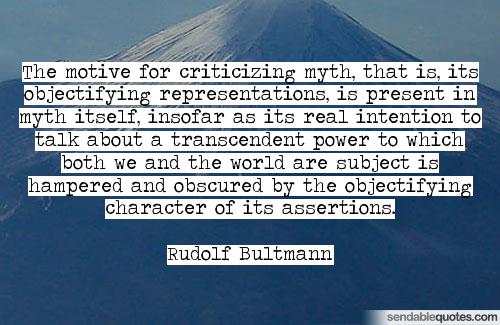 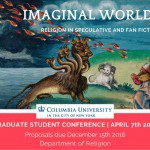 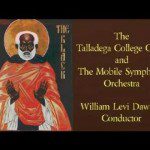 October 30, 2016 R. Nathaniel Dett, The Ordering of Moses
Recent Comments
5 Comments | Leave a Comment
"That's kind of a weird coincidence but I was just commenting on the extraordinary claims ..."
John MacDonald Extraordinary Claims and Extraordinary Evidence
"I think it's Rudy Guiliani (seen here https://www.youtube.com/wat... interacting with a famous friend of Jeffrey ..."
Choose Wisely Kirk Cameron at the Indianapolis Public ..."
"I just did a blog post that, in part, argues for a late date of ..."
John MacDonald Rethinking the Dates of the New ..."
"Thank you Professor McGrath!! What has happened at so many universities in the U.S. and ..."
Daniel Wilcox The Freedom to Be Offended and ..."
Browse Our Archives
Related posts from Religion Prof: The Blog of James F. McGrath