Call for Papers: The Place of Religion in Film

March 30th-April 1st, the University of Syracuse will host a conference on “The Place of Religion in Film,” as part of the Ray Smith Symposium Series. Here’s the full call for papers:

The Place of Religion in Film

with plenaries featuring
Joaquim Pinto, director, and Nuno Leonel, cinematographer, of What Now? Remind Me (2013)

Hosted by Syracuse University, as part of the Ray Smith Symposium Series

Papers are encouraged on such questions as:

How are viewer presumptions about “religion” placed in film to construct or suggest particular norms or values?
How does film engage the architectural, domestic, or ritual places of various religions?
How does film assume or explore the ways in which religions keep bodies (or institutions, or communities) in their expected places–or the ways in which dominant social and political laws and voices keep religions in their expected places?


What are the ways in which film negotiates the place of indigenous or immigrant religions via-a-vis dominant assumptions about religion?
How does film track the shifting places of religion in response to war, commodification, or social media.
Proposals should include a title and a 350-word description of the paper. Papers for inclusion in the program will be selected on the basis of this description. Proposals also should include on a separate page the name of the author, the author’s academic affiliation and e-mail address.

Proposals are due by January 5th, 2017 and should be sent by email to Deborah Pratt (dpratt@syr.edu) with the subject line, “Religion and Film Conference Submission.” Please direct questions about form or content to M. Gail Hamner (mghamner@syr.edu).

October 25, 2016
The New Way to Review Manuscripts
Next Post 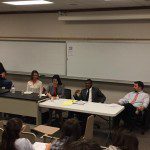 October 27, 2016 Beyond Two-Party America
Recent Comments
1 Comment | Leave a Comment
"I'm reminded of the ironic punishments episode of the Simpsons where Homer is forced to ..."
John MacDonald Musical Hell
"With Putin having the Russian Orthodox Church to back him up, Trump has some competition. ..."
NyssaTheHobbit Trump as Antichrist
"Jane Ravenswood, your statement doesn't make sense to me. Yes, it's quite possible that we ..."
Edwin Woodruff Tait Conservative Christianity Isn’t Christianity
"I could definitely see Satan torturing someone with boredom by playing the same song over ..."
John MacDonald Musical Hell
Browse Our Archives
Follow Us!