Doctor Who: The Pyramid at the End of the World 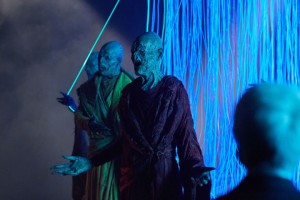 The episode begins with the Secretary General of the UN coming to Bill Potts looking for the president, to which Bill responds that she doesn’t know the president and wouldn’t have voted for him, because he’s orange. On the one hand, I wonder whether future generations will get the reference, while on the other, I am surprised that orangeness was Bill’s big criticism of Trump. But even if the allusion feels like a missed opportunity, it was a nice comical way of introducing the Doctor’s status as president of the world to Bill – and reminding viewers.

The Doctor is in the TARDIS meditating – while playing the guitar. He is interrupted because a pyramid has appeared where none was there previously. The mysterious monk-creatures inside say that they will rule the Earth – but only when asked. They then set all phones and clocks on Earth to 3 minutes to midnight symbolizing the doomsday clock. They predict that life on Earth will end soon by humanity’s own hand. They show the simulation machine, and a simulation of a year in the future from that moment, and all life on Earth is gone. The monks say they want to be invited to rule, because rule through fear is inefficient. Yet rule through love, the Doctor says, is slavery. The UN Secretary General nevertheless tries to offer consent, but because he is motivated by fear, his consent is deemed impure and he is killed. 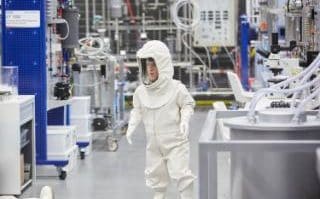 The commanders of armies try making peace, but that doesn’t change the proximity of doomsday. The Doctor realizes that it is not war that is the risk. And so the Doctor puts all top secret documents online in searchable form so that they can start Googling. Meanwhile, we are shown the biotech research that is going awry, creating a strain of bacteria that has the potential to wipe out all life. The Doctor turns off the cameras at all the labs around the world engaged in dangerous research – and then sees which one the monks turn back on, providing him with the clue he needs to figure out which one they had been watching.

The scientist in the Yorkshire lab, Erica, sees the TARDIS appear and says, “Oh my God.” The Doctor replies, “No, I’m the Doctor – it’s any easy mistake to make.” Meanwhile, the generals offer consent – but it is based on strategy and so it too us judged impure. The Doctor sets a bomb to destroy the bacteria, and then needs to enter a combination in order to open the door – but he can’t see it. So he tells Bill and asks for her help. And she asks the monks to restore his sight, in exchange for her consent to their rule of Earth. And so the bargain is made – and the consequences will presumably be explored in the remainder of the season.

The fact that the monks, rather than battle for conquest, simply seek an opportunity and then offer to save us from ourselves, makes a wonderful political point. For a long time, war was our biggest end of the world doomsday fear. And yet that very fear is more likely to lead to our enslavement than war itself is. History and fiction both provide examples of people willing to give their love and devotion to a “savior” who, even if they do in fact do what they promise, may be much worse than the problem to which they are the proposed solution.

What did you think of “The Pyramid at the End of the World”? And in particular, in addition to your thoughts on the episode’s political commentary, I would love to know what you think of the Doctor’s quip about mistaking him for God (because of the eyebrows) being an “easy mistake to make.” 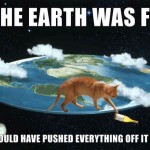 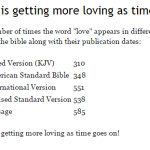 May 31, 2017 The Bible is Getting More Loving
Recent Comments
9 Comments | Leave a Comment
"Thank you for sharing this!"
James F. McGrath Transgender and Christianity: From Andi to ..."
"If this means the Trump Evanglicals go to heaven and leave the rest of us ..."
Kyllein MacKellerann " Trump as Antichrist
"hey prof mcgrath...got in touch with john elefante, the songwriter...this is his response."Yes, when I ..."
David Di Sabatino Transgender and Christianity: From Andi to ..."
"Waiting for a natural disaster is not the nature of the process. Scientists know better ..."
jekylldoc Not Liberal, Just Literate
Browse Our Archives
Follow Us!