Doctor Who: World Enough and Time

SPOILERS AHEAD! The episode begins with the Doctor exiting the TARDIS on a frozen landscape and beginning to regenerate, and shouting “No!” That’s certainly a dramatic way to lead into the first part of a season finale! 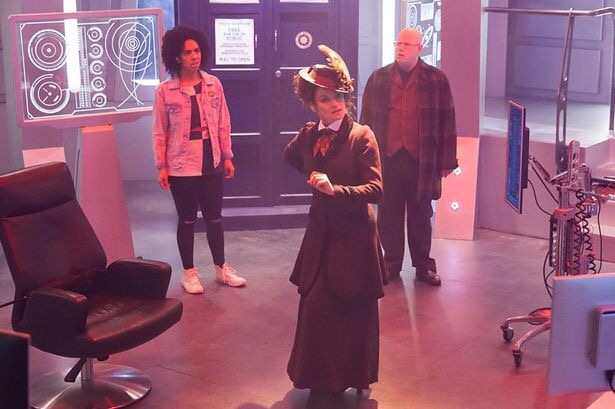 After the credits, we see a 400-mile space ship trying to reverse away from a black hole. The TARDIS materializes on the bridge, and Missy exits introducing herself as “Doctor Who.” Missy says that is his real name, which he chose, but then he dropped the “Who.” The Doctor communicates with Missy via an earpiece. But things go awry on this attempt to test Missy. Someone comes to the bridge saying that there are creatures coming to seek humans, and so he needs to kill whoever is attracting them. The Doctor tries to talk him out of it, but the man shoots Bill straight through the heart.

In a flashback the Doctor says that Missy is his oldest friend in the universe. He says that she is the only person he has met that is remotely like him. She was his man-crush, his first friend at the academy. There is discussion about whether they were both male back then. He says that they made a pact to see every star. They also talk about the mortality of humans. And she asks the Doctor to keep her alive.

Back in the time that is the main focus of the story, the entities arrive on the bridge and take Bill away to repair her. Later we see her in a hospital bed, with a surgeon telling her that total conversion wasn’t necessary, although it will be in time. Bill hears someone saying “pain” over and over again and goes to see where it is coming from. There is a sign marked “Conversion Theater,” with doors marked “In” and “Out.” Bill finds the man in bandages who is making the sound – then a nurse comes in and turns down the volume. Another man is saying “kill me” over and over, with his volume turned down as well. Bill talks to someone called Mr. Razor, who shows a video of her friends on the bridge, and we learn that time is moving much slower on the bridge because it is closer to the black hole. Razor says that they are dying, and so all must be converted to survive – while the Doctor explains that the many beings in the back of the ship are the descendants of the crew. Razor shows Bill around the coty on the ship where people are living in misery and pain. He says that soon they will be upgraded and their exodus can begin. Bill is taken to the operating theater, where we learn that the surgeon has developed something to stop the pain, which fits over the head.

The Doctor, Missy, and Nardole descend to the lower levels. Razor tells Missy that she has been there before. She discovers that the ship is from Mondas, while the Doctor finds that Bill has been converted into a Cyberman. And then Razor reveals that he is the Master (played by John Simm), and he says that he is very worried about his future. Then he and Missy go to the Doctor, where he says that it isn’t an Exodus so much as a Genesis – the Genesis of the Cybermen. The episode ends with Bill saying that she waited for the Doctor – and shedding a tear. And we see that beneath the gauze mask, her face and eyes are still there. Does that mean that there is hope for her restoration in some way?

This is the darkest episode of Doctor Who I remember seeing in a very long time. I loved what Missy did with the Doctor’s name, as well as many other snippets of conversation (such as that about whether being evil and being clever are the same thing). I can’t imagine what is going to happen next. But this is powerful stuff, with a fascinating exploration of the origins of one of the most iconic groups of non-humans from the classic series.

There are bound to be some fake-outs, knowing how recent Doctor Who has tended to do things. Indeed, this episode begins with the Doctor regenerating, and has Bill with a hole shot right through her early on, as well as discussion of the gender fluidity of time lords (and the fact that, despite this fluidity, they still go with the masculine “time lords“).

What did you think of the episode? What do you think will happen next week? 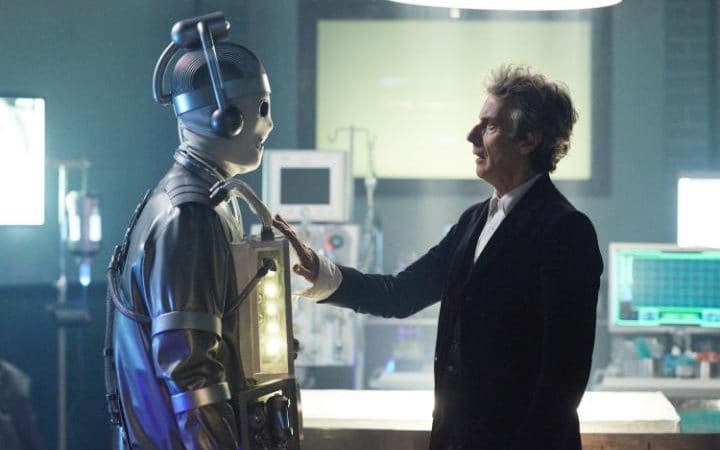 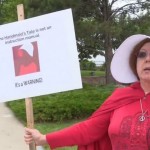