A while back, Jim Davila asked whether the card game included certain extracanonical Jewish texts, and I told him that if he gave me a list, I could make a deck with whatever works he wishes. Some of the ones he mentioned were already in the Old Testament/Jewish Bible deck, and so he substituted a few others.

The new deck includes 2 Enoch, Apocalypse of Abraham, the Book of Giants, Ahiqar, and more.

You can purchase it here:

I have also updated the rules to include a detail that I inadvertently omitted in earlier printings, as well as specifying a quicker end to game play as the default while still listing other play variations who prefer a longer game with a more vibrant and competitive ending. You can download the updated rules from the Game Crafter website.

Future decks with more of the Hebrew Bible, Septuagintal variations, and extracanonical Jewish works are planned, as are decks focused on the Dead Sea Scrolls and the Nag Hammadi texts. I’ll keep making them as long as you all keep enjoying playing using them!

What other decks would you like to see? If you don’t have any yet, you might like to start with one of the ones linked below… 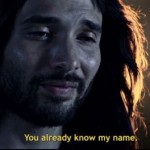 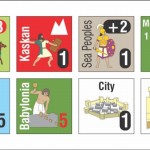